In 2014, Casey Dunn was shown a vacant corner lot in East Austin. He immediately made an offer. The lot — 100 feet wide, 120 feet deep, and empty save for a metal shed in the far northeastern corner — had no easements, no trees, and no topography to speak of. The flexibility and opportunity attracted the photographer, who was looking to build his first home. After the purchase went through, Dunn called his friend, the architect Arthur Furman, AIA, who at the time was employed at his father’s firm, Furman + Keil. One day, the two sat in Dunn’s truck and looked at the site, talking about possibilities for nearly an hour. Furman made some sketches. Dunn liked what he saw. And so began a collaborative process between them that soon included Furman’s wife and practice partner, Annie-Laurie Grabiel and Dunn’s wife, Sarah Weinstein Dunn.

Construction on the house would not begin for nearly two years. The design phase went on for months, with Dunn coming over to Furman and Grabiel’s house in the evenings, sketching and exploring ideas over wine. Dunn was in no rush to build. He wanted to arrive at superb ideas. “We were having a good time,” Furman says. The lack of site constraints presented a bounty of options. The sun became the biggest driver for the orientation. Furman and Grabiel situated the long side of the building to face north-south, minimizing exposure on the east and west facades. They also situated the house on the southern edge of the property, leaving the majority of the site as one contiguous open space.

Dunn had one requirement for the house itself: a rectangular plan with a gable roof. After years of exposure to a legion of architectural styles, he wanted simplicity in his own abode. The directive challenged Furman and Grabiel to make purposeful design moves that would add character to the otherwise-rudimentary form. The home’s scale, for example, was not achieved easily — the simple shape belies the different exercises the designers undertook to achieve the right proportions. There were concerns about the building standing out too much compared to neighboring homes, so the final structure is not quite one-and-a-half stories tall.

The 60-ft-long by 27-ft-wide house is clad in smooth, black-grey burnished stucco — a finish inspired by Dunn’s time in Marfa (during the design process he was working with Hellen Thompson on the book “Marfa Modern” and regularly commuted between Austin and West Texas). The celebration of the inevitable cracking and aging of the stucco is continued in the choice of Douglas fir windows. While costly in the long run, as they will weather in the Texas heat and have to be re-stained, their warmth lessens the starkness of the exterior, creating a home that, as Grabiel says, “feels like it wasn’t born yesterday.” In the house’s only instance of sun-shading (there are no roof overhangs), Furman placed painted sheet metal ledges above the windows. These, coupled with the lamp fixture at the center of the street elevation, produce geometric shadows on the otherwise-unembellished facade. 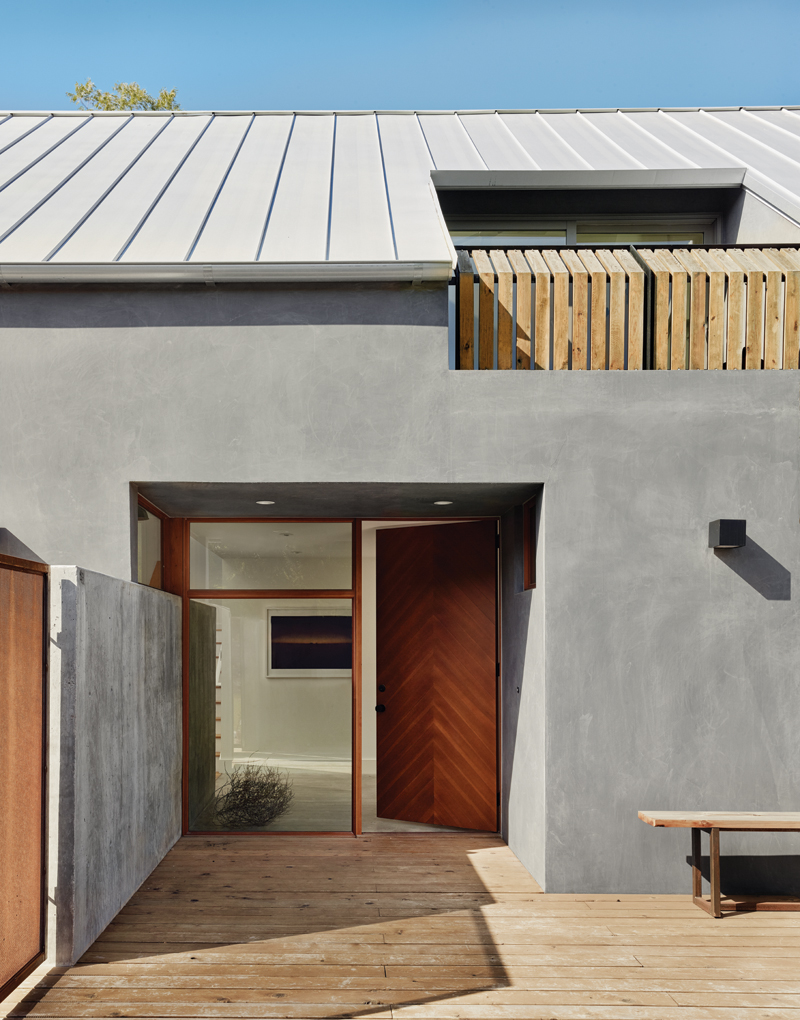 To create a covered entry without compromising the purity of the building’s form, the architects recessed the front door.
PHOTOS BY: Casey Dunn

The designers located the bedrooms near the street, allowing the main living space to occupy the rear of the house, where it opens onto the large outdoor space. A cast-in-place concrete wall acts as a wayfinding device to the front door. It defines the boundary of an entry courtyard and separates the approach from the rest of the compound. The wall with entry recess is one of two places where the designers pierced the rectangular box form — the other is an upstairs balcony off the master suite. The concrete wall is surrounded by high windows to emphasize it as an aesthetic focal point. It also drove the orientation of the kitchen and determined which appliances were chosen: Using the wall as the stove’s backsplash led to the choice of a downdraft rather than a vent hood.

The kitchen opens up to an airy, double-height living and dining room. The designers were concerned about the potentially cavernous feeling of the main living area, so they incorporated two spatial devices in order to get the ceiling plane lower: salvaged longleaf pine beams and a field of hanging warehouse lamps. The floors are of the same material as the beams, sourced from Delta Millworks in Austin. Sarah Weinstein Dunn directed this material choice. Initially, the main space was to have polished concrete floors, but Weinstein Dunn’s childhood home influenced the choice of wooden floors. “I had grown up with warm and cozy homes, and I was concerned with having concrete floors in this big space and having it feel uninviting,” Weinstein Dunn says. Dunn says that this one decision informed the rest of the style choices in a big way. 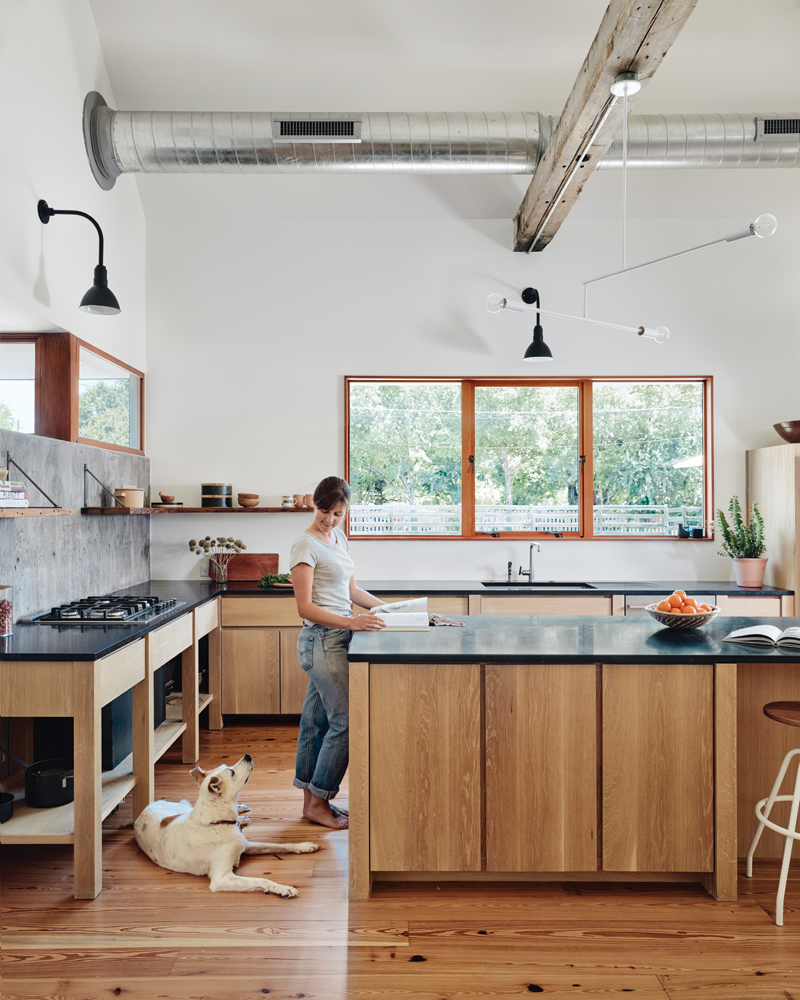 Weinstein Dunn, pictured here, directed the choice to have a north-facing window above the kitchen sink and wooden floors.
PHOTOS BY: Casey Dunn

The kitchen has matte black soapstone countertops and stained white oak cabinetry. White walls reflect light from the picture window on the eastern face — which looks out into a grove of Mexican plum trees — and the ample openings on the northern side. The furniture is a mix of vintage and designer pieces. The ground floor bathroom uses leftover soapstone from the kitchen as its countertop. There is one bedroom downstairs on the southern side with an office across the hall to the north. A staircase off the kitchen leads up to the second floor, which is entirely devoted to the master suite. A balcony on the northern side cuts into the gable roof and is accessed by a sliding glass door. Although the master bedroom floorplan is narrower than the footprint of the structure (mechanicals are housed in the triangular space where the gable meets the floor), the balcony feels like an extension of the room and lends a more generous spatial quality to the upstairs. When they realized that the regulated code height of the balcony’s guardrail was going to make it stick out above the slope of the roof, the designers angled the railing inward so it would conform to the gable shape.

The upstairs furnishings maintain the home’s salvage aesthetic. Dunn found the sliding door leading to the bathroom on the side of the highway during a drive home from a photoshoot. Dark nail holes are streaked along all sides, filled in by woodworker Eric Culver; these black knots are also seen in the wood floors. Open wooden shelving in the bathroom was salvaged from a furniture warehouse a few blocks away from Dunn’s studio. The bathtub was taken from his father’s friend’s place — an old frame house where Townes Van Zandt and other Austin musicians once lived. 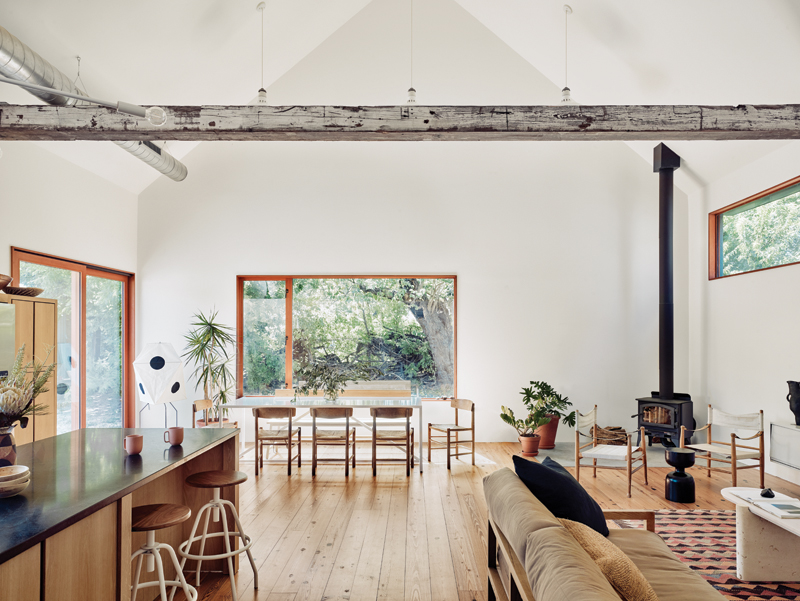 What started out as a side project for the designers slowly turned into a full-time occupation as the design gained momentum. When construction began in the summer of 2016, Furman realized it was time to leave his father’s firm and start his own practice. He and Grabiel founded Side Angle Side that summer, which gave them time to be on site during construction and allowed them to make many on-the-fly design decisions. The couple recognizes that this spur-of-the-moment design process is different from most, but also that this project is different from most. “This is a first for us, because we were thinking about how to design on something that you can design anything on,” Grabiel says. “At the same time, it was important for this house to feel grounded and have soul.” Dunn’s confidence in the duo helped facilitate both the synergistic design process and the impetus to establish a name for themselves as a team. This confidence was inspired, in part, by the success of famous collaborative efforts throughout history. Dunn referenced the work of Julius Shulman, Richard Neutra, and Raphael Soriano when describing relationships that “have grown up together,” much like Dunn, Weinstein Dunn, Furman, and Grabiel did during the process. Their desire to have a peer-to-peer working relationship — rather than designer-to-client — influenced Dunn to work with Furman from the beginning.

As a project of firsts — first house for Dunn and Weinstein Dunn; first project for Furman and Grabiel, both as a couple and as Side Angle Side — there were external pressures to be felt. However, drawing inspiration from different backgrounds, regions, and genres did not convolute the structure but instead produced simplicity and restraint. Thoroughly unique in its ability to appear both timeless and modern, Dunn’s house along with the story behind it is an example of the possibilities that can come of partnerships between friends and couples. 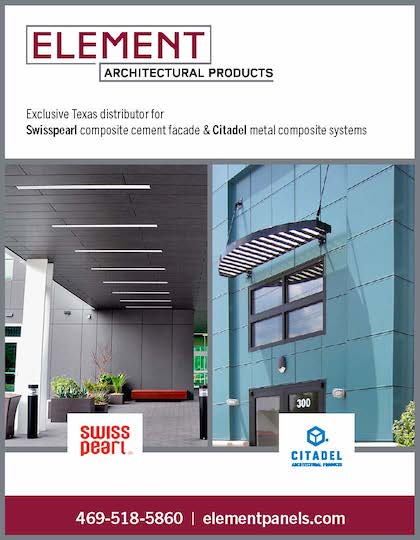