For nearly the past 100 years, Houston has been proud to be a world leader in the oil and gas industry. However, despite the recent fracking boom, there seems to be a growing sense among its entrepreneurial and political elite that this economic model is going to fail at some point, or at the very least drastically contract, just as the manufacturing economy did in the Rust Belt. FOMO is writ large in their minds. The fear is Houston will be left behind. That Houston was the largest city not to be included in the top 20 choices for Amazon’s new headquarters, for example, stung badly. A concerted attempt to reorient the city is evident in such initiatives as the ambitious push to enhance its major parks and bayou green spaces and the expansion of public transportation, both of which were seemingly inconceivable a generation ago, when the only thought by those in power was how to get more cars on the freeways.

Prestige institutions that can’t just up and move want their physical and intellectual investments in the city to remain viable as well. The president of Rice University, David Leebron has made it a centerpiece of his administration to increase both the stature of the school and its influence beyond the hedges surrounding the campus. To this effect, he has initiated a nonstop building campaign and increased student body. In 2009, there was serious discussion of acquiring the Baylor College of Medicine to get a foothold in the Texas Medical Center. Several interdisciplinary institutes have appeared. The latest effort to move beyond the campus includes Rice’s plan to reclaim the old South End as a hub for tech workers.

Rice was endowed with $4.6 million in 1904. In 115 years, that endowment has grown to $6.3 billion by means of Rice’s varied investments, a little more than 10 percent of which are real estate holdings. One highly visible property is the tract at South Main Street and Wheeler Avenue a couple miles south of downtown that houses a New Deal-era Sears department store building much in the local news due to its recent closure. In January of this year, Rice publicly re-christened this building “The Ion.” It will be repurposed as the centerpiece of what Rice is variously calling an “innovation hub” or “innovation district.” The stated intention is “to support businesses at all stages of the innovation lifecycle and provide resources for Houstonians seeking to participate in the innovation economy.” Outside institutional project partners include the University of Houston, UH-Downtown, the University of St. Thomas, Houston Community College, Texas Southern University, Houston Baptist University, San Jacinto College, and the South Texas College of Law.

Originally the site of the expansive gardens around the Walter B. Sharp House (1895), a rambling Queen Anne building in what was then the almost rural outskirts of Houston, this tract, along with two adjacent city blocks, was later acquired by Rice. In 1938, the house was demolished to make way for a new suburban Sears, Roebuck and Company store (1939), designed by Chicago architects Nimmons, Carr & Wright. This store was one of five locations across the country designed by the firm that was profiled in Architectural Record in September 1940 as being “planned for the motor age.” The $1 million retail complex, which opened in November 1939, encompassed four city blocks. It included the 195,000-sf, four-level store, parking for 700 cars, a super-service station with 16 gas pumps (demolished), and a freestanding building selling farm supplies (still standing). The upper floors of the store were windowless and fully air-conditioned; the escalators connecting the floors were the first of their kind in Houston. Local reports at the time of its opening also remarked on the extensive interior art program of murals depicting scenes from Texas history, painted by Texas native Eugene Montgomery. In 1945, Sears, then highly profitable, entered into a 99-year lease with Rice. Fast-forward to 1962, when the building’s street-side windows were bricked-over and the upper parts of the building were clad in a slipcover of corrugated metal panels. (Ironically, this preserved the building, and today it is one of only a handful of relatively intact prewar, early suburban Sears stores left in the country. Houston’s first auto-oriented Sears building (1929) on Allen Parkway, also designed by Nimmons, Carr & Wright, was demolished in 2006 to make way for an Ismaili Muslim cultural center, for which the architect was selected only this year.) In January 2018, Sears, in the throes of severe economic distress, closed the store. 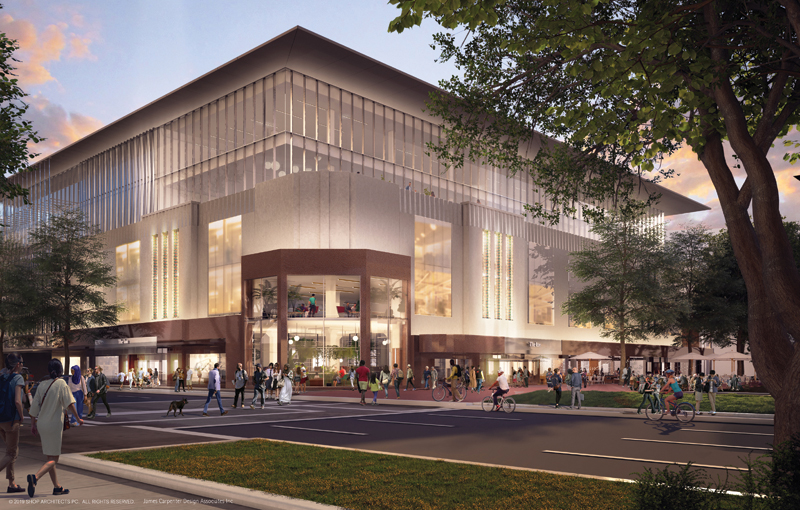 The building’s corrugated metal panel exterior (which helped the structure achieve the status of being one of the only relatively intact prewar Sears stores left in the country) will be removed to add two additional stories and a glass curtain wall to The Ion.
IMAGE COURTESY: Rice University

In October 2017, Rice University bought out the remaining 28 years of the lease at favorable terms after several years of on-and-off negations. In the process, Rice acquired the city block directly north containing a precisely detailed, steel-framed Miesian tire center (1960), designed by Houston architect Hugo V. Neuhaus. This created 9.4 acres of contiguous property. By October 2018, Swamplot reported that Rice had several additional properties, increasing their foothold to 14 acres. At press time, according to the university, the area is up to 16 contiguous acres. No maps of the property holdings have been officially released.

Rice commissioned New York real estate and economic development planning guru John Alschuler to assemble a team to redesign the Sears site. Alschuler’s firm, HR&A, is perhaps best known for preparing the impact studies that showed the economic rationale for transforming the High Line into a public park. The final selections include an impressive roster of well-known design professionals. There are New York architects SHoP for the design and Houston’s Gensler office as architect of record. New York lighting designer James Carpenter was commissioned to help bring natural light into the deep, windowless floorplates. New York landscape architect James Corner Field Operations is designing the public plaza and garden that will occupy a portion of the surface parking lots. The Houston office of Hines will manage the project. Interior demolition is currently underway with new construction expected to begin later this year. Completion is scheduled for late next year.

Initial renderings of the redesign were released in January, and they depict one exterior view and one interior view. Though details remain scant, on top of the building there will be a two-story addition clad with a glass curtain wall. Large windows will be cut into the sides of the building. Inside, the major design move will be to cut a 100-ft-long atrium through the center of the 50,000-sf floors. Although the project borrows the language of preservation, “the long-awaited renovation of the historic Sears building on Houston’s Main Street,” the design as presented in the two public images appears to overwhelm the building and erase much of its historic character. The architects were vague when asked if there were plans to uncover or restore the interior murals, historic color images of which were discovered by Preservation Houston. Rice says the murals have not been found, and confirmed there are no plans to landmark the building. (There are no landmarked buildings on the Rice campus.) One cannot help but wonder why, with all the open space around the building, a new structure was not designed so that the historic Sears building could be rehabilitated in a more sympathetic manner.

Preservation culture in Houston remains stuck in a stubborn infancy. An invasive remodeling project of New York’s post-modern AT&T Building (1984, designed by Philip Johnson and John Burgee) caused such a public outcry that the developers were compelled to submit a more respectful design. So far, the Ion project has been met with nearly one hundred percent public approval in Houston. This project, in its design and reception, suggests that Houston, while clearly making strides in improving its urban environment, is still grappling with how to create world-class architecture without sacrificing its scant historic fabric to progress.

Ben Koush, AIA, is an architect in Houston.