SCHAUM/SHIEH is an architecture practice that works between Houston and New York City. Troy Schaum and Rosalyne Shieh met as graduate students in a Princeton studio course taught by Paul Lewis. After school, they both lived and worked in New York City before accepting teaching positions — Schaum as a Wortham Fellow at Rice University and Shieh as the A. Alfred Taubman Fellow at the University of Michigan. This was post-2008. Given the treacherous job market, both sought out academic roles while looking to still make creative work. They collaborated on competitions and worked as part of a collective installation in Detroit that initiated their Sponge Urbanism project. At this point, they formalized their working partnership into SCHAUM/SHIEH, so that they could consolidate their collaboration and identify themselves as a single entity.

Schaum and Shieh see their practice as an ongoing exploratory conversation that takes place through the medium of design and the action of designing. Schaum commented that they understand the “act of building as a space of negotiation and constructing agreement.” Given the lack of commissions in the early years, they instead explored issues that were important to them: “We detached the question from the necessity of the question,” Shieh says. This searching has led to a studio that boldly makes shapes, conducts experiments, and delivers the unexpected.

From the start, the duo was adamant about making buildings. Shieh links the pragmatism of construction to a “direct way of being in the world that reminds you that there’s a logic that comes out of making that is distinct from the logic that comes out of your head.” The firm has a number of completed projects in Texas. In Houston, their White Oak Music Hall has quickly become a staple in the city’s live music scene. Already they have received a number of awards and were finalists in the 2017 PS1 Young Architects competition with their entry, “Blow Up the Wall!”

Currently, the office is at work on a number of commercial projects in Houston, in addition to its ongoing efforts with the Judd Foundation in Marfa that focus on preservation. Both architects still teach — Schaum is now an associate professor at Rice Architecture and Shieh is the inaugural Marion Mahony Emerging Practitioner Fellow at MIT Architecture for the 2018-9 academic year. This past fall, their exhibition, “Blanking,” was installed at the University of New Mexico. In it, their work appears alongside artistic precedents, reference images, and collected objects. The network of materials “de-centers the work,” instead focusing on the latent relationships that constitute the potent universe of SCHAUM/SHIEH’s ambitious partnership.

The Transart Foundation is a space dedicated to the intersections between art and anthropology. Located on West Alabama Street in Houston, just blocks from the Menil campus, the complex consists of a new gallery building and a smaller remodeled private art studio. The new building, a sliced trio of white stucco volumes, sits perpendicular to the street. Its well-detailed facade peels away at its corners like a billowing sail, revealing graceful windows at some places and formal indentations at others. Inside, two triple-height galleries animated by the light from the tapered windows provide space for art, while a central core houses meeting, storage, and support spaces. 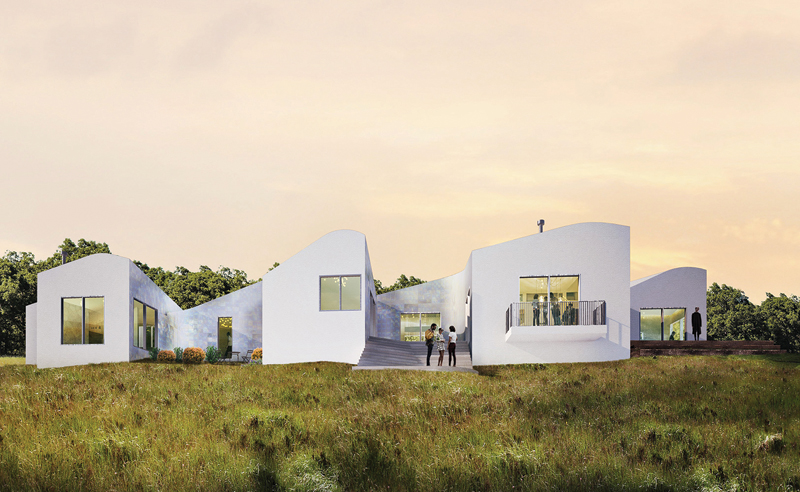 This home, sited on the slopes of the Blue Ridge Mountains in Virginia, is a vacation residence and writer’s retreat. In plan, seven pods are strung together on alternating sides of a corridor, and the resulting exterior pockets form courtyards, gardens, and porches. Large windows provide views out to the mountains but also between rooms in the home. The roof is a series of curved and sloped forms whose ridgelines run at an angle to the architecture’s boxy organizational logic. The house, to be finished in white iridescent tile, becomes a place to gather as well as to work. 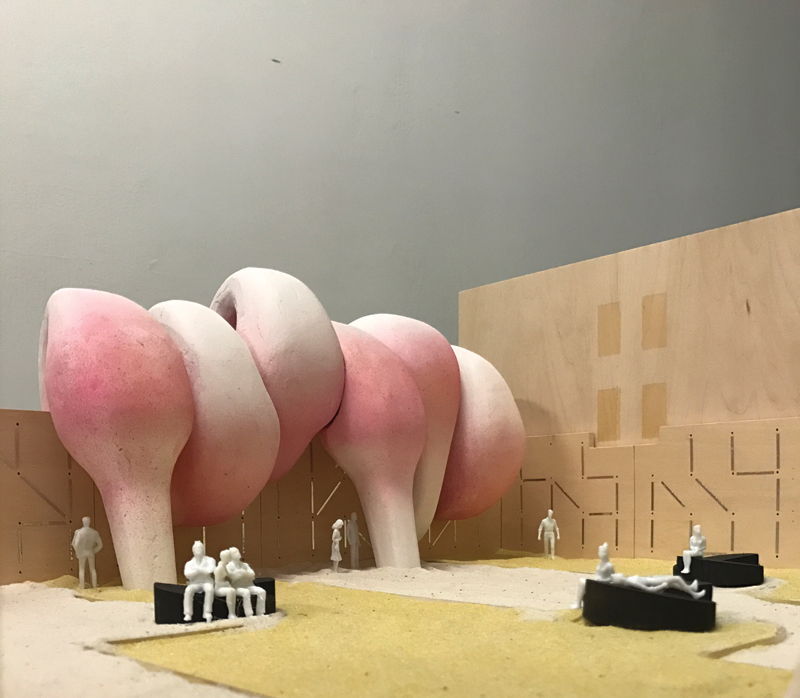 Blow Up The Wall!

The design of this project for the MoMA PS1 Young Architects Program was bookended by the election and inauguration of Donald Trump, whose call for a wall on the U.S.-Mexico border has become a device of hate. While Trump’s wall is an embodiment of intolerance and xenophobia, “Blow Up The Wall!” aims to turn a wall into a place of inclusion. Large inflated figures hang over the MoMA PS1 courtyard walls, making places to gather, tarry, and find refuge. During the museum’s Warm Up dance parties, lights lining the inflatables’ surfaces pulse to the music, and rocking benches pump up the bulging figures. Over time, a streaking mixture of pink, white, and yellow sand roils at the installation’s base.