Bellaire, Texas, a former bedroom community for Houston now subsumed by its host, lies almost completely in the flood plain of Brays Bayou. Because of this, the Bellaire permitting office has required all new houses to be elevated on concrete masonry block bases several feet above the ground. The result is a heterogenous streetscape of unusually tall McMansions interspersed with the modest ranchettes that formerly were the majority of its housing stock. Recently, architect John Tsai, AIA, an adjunct lecturer at the University of Houston College of Architecture and principal of JT ARC Studio, used this requirement as the generative concept driving the design of the new house he built for his family.

Rather than even out the three-ft difference between the garage and first floor, Tsai instead chose to extend it up through the entire house, creating what he calls a “split condition.” The result is that what appears from the outside to be a two-story house actually has six separate levels. A garage and storage area, meant to be flooded, are at the ground level. The main living area, kitchen, and guest room are on the first full level. The master bedroom suite and a loft-study are on a mezzanine level. The children’s bedrooms and study area are on the second full level. Finally, rooftop terraces are located above both the master and children’s levels. A 28-ft-tall atrium rising from the kitchen to the uppermost part of the house allows visual connection among the multiple levels.

The concrete block wall required by code in Bellaire to raise the living area above the base flood elevation continues upward, becoming the load-bearing walls of the lower levels of the house. Tsai used a proprietary concrete masonry unit called Omni Block with special interior profiles shaped to accept preformed Styrofoam inserts so that the single-wythe walls meet minimum energy code insulation requirements. According to the architect, this system was appealing because the block wall did not require an additional layer of insulating material and could therefore be fully exposed. Wiring is cleverly run to floor receptacles on the lower levels to avoid conduits on the pristine block walls. The block walls appear mostly solid from the street, with a single broad opening supported by an exposed galvanized steel lintel. This frames a recessed set of steps leading to the bright chartreuse-painted front door. Additional daylight enters the main living area through a series of narrow vertical slot openings scattered around its perimeter. 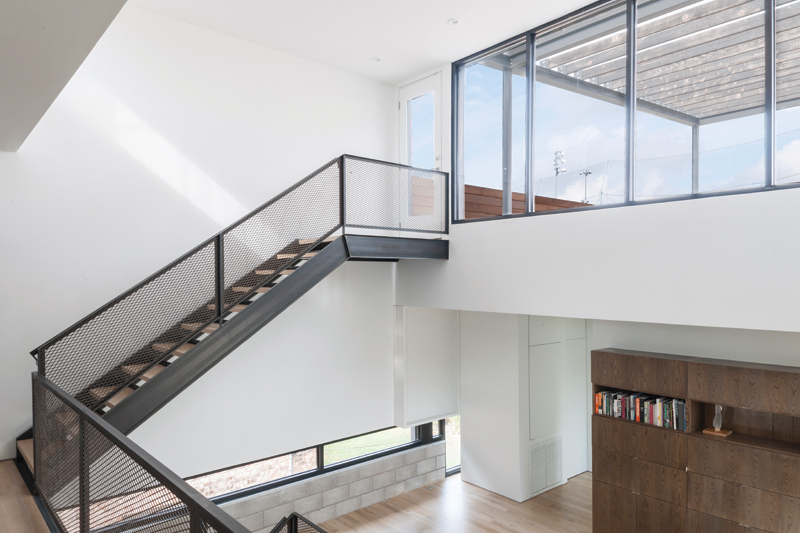 The form of the house comprises tautly stretched masses in precarious, but elegant, balance. The wood-framed upper level is clad with vertical cedar boards forming a rainscreen over a waterproof membrane. It hovers lightly over the block base, visually separated by a continuous clerestory window. Tsai, in an experimental (and slightly masochistic) mode, decided to char the boards black with a blowtorch in emulation of the traditional Japanese shou sugi ban preservation technique, a task he and his studio colleague Robert Mazzo performed over a grueling several weeks last summer when the house was under construction.

The garage doors are custom-fabricated steel frames with expanded steel mesh to allow air and water to pass through. They are simply finished with a bluing agent usually used to protect gun barrel steel, followed by a clear coat. This detailing was used throughout the house in the extensive railings on the stairs and mezzanine levels. Interior finishes are appropriately stark for the house of an architect and professor: pickled oak floors, dark-stained oak cabinetry, thin black countertops, and gray block or white-painted gypsum board walls and ceilings.

The rigorous design of the Tsai house is a challenge to the mediocrity of most of the bloated new construction in Bellaire. It makes a virtue out of banal code requirements and elevates them to the level of architecture. Although the site is flat, featureless, and perilously close to the 610 Loop with its roar of traffic, the architect has carefully mitigated these shortcomings and created a sophisticated and engaging dwelling space for himself and his family. The result is serene, light-filled, and, most importantly after Hurricane Harvey’s massive flooding, dry!

Ben Koush, AIA, is an architect and writer in Houston. His book “Constructing Houston’s Future: The Architecture of Arthur Evan Jones & Lloyd Morgan Jones” was published by Houston Mod in 2017.