Craftsmanship names an enduring, basic human impulse, the desire to do a job well for its own sake.

Design-build. It invokes a certain romantic nostalgia for a bygone era, calling to mind the image of the master builder — one who harbors a strength of character manifested through a respect for craft and a willingness to get one’s hands dirty. In its most basic and bureaucratic definition, design-build simply means that the designer and builder operate as a single legal entity; yet its expression is unique to each person who practices it. And, though it rarely means that the person who conceptualizes the design is the one swinging the hammer, the ethos of the master builder still seems to whisper through the design-build process in contemporary practice: a deep sense of pride in one’s work, an investment in quality execution, and a high value on the relationship with those for whom one builds. 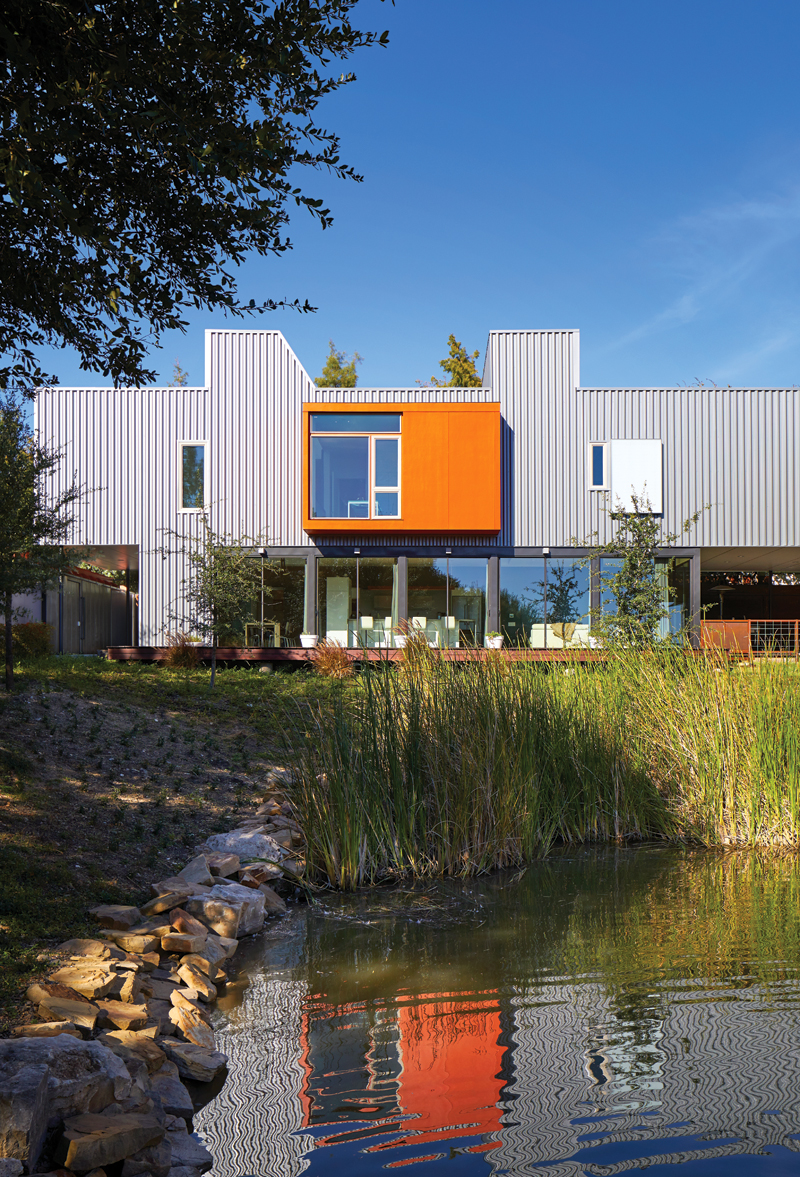 The ground floor of 16 Vanguard is designed as a glass pavilion with private spaces encased in metal paneling above.
Photo by Dror Baldinger, FAIA.

Partners Thad Reeves, AIA, and Andrew Nance, AIA, of the San Marcos- and Dallas-based firm A.GRUPPO spent half a decade contemplating a transition into design-build before taking the plunge. Like many architects considering this project delivery method, their fundamental question lay in how to structure it. Do you partner with a construction company and form an office? Do you hire a full-time general contractor to manage construction? Or do you do it yourself? They opted for the latter model, managing the construction process themselves, with a single person serving as point for each project from design through completion.

Their foray into design-build sprang from the desire to more closely control the translation of their architectural vision into reality, ensuring that the larger conceptual ideas made it through to the built work. “Architects spend a lot of time working with a client to develop a project,” Nance says. “It then gets handed off to someone else to build, who ultimately tries to makes it fit their paradigm of the world. Changes get made; sometimes it’s okay and sometimes it isn’t. The architect, the one who has been thinking about the process from the beginning, is better positioned to make the decision on which changes are in keeping with the intent of the project.”

Reeves contends that learning to be a better builder inevitably leads to better architecture. Dealing with the element of surprise and cultivating a certain nimbleness comes with the territory, be it responding to material or labor shortages, construction sequencing, or economics. “It changes the way you draw and how you think about things,” Reeves says. “You become a lot more conscious of your decisions, and it makes you a better architect.”

In their perspective, the 16 Vanguard project likely exists only because it was completed as design-build. Beyond the three bedrooms and two baths, the client’s only request for the home — located in the Urban Reserve neighborhood development in North Dallas — was to maximize the ground floor glazing in order to capture views of the two nearby ponds. The foundation was required to be built on concrete piers, which average 20 feet in depth in the neighborhood. “To achieve a glass box with a floating bar above — it takes a lot of structure to make that work.” Nance says. “When pricing out a conventional pier foundation, support slab on grade with carton forms over piers, and all the steel windframes — this is where some builders may start throwing numbers with large safety margins until the client says, ‘It’s too expensive, forget it.’ It ultimately takes solving the problem, rather than just identifying the problem. We were motivated to solve the problem and come up with a more affordable solution without changing the design intent.” 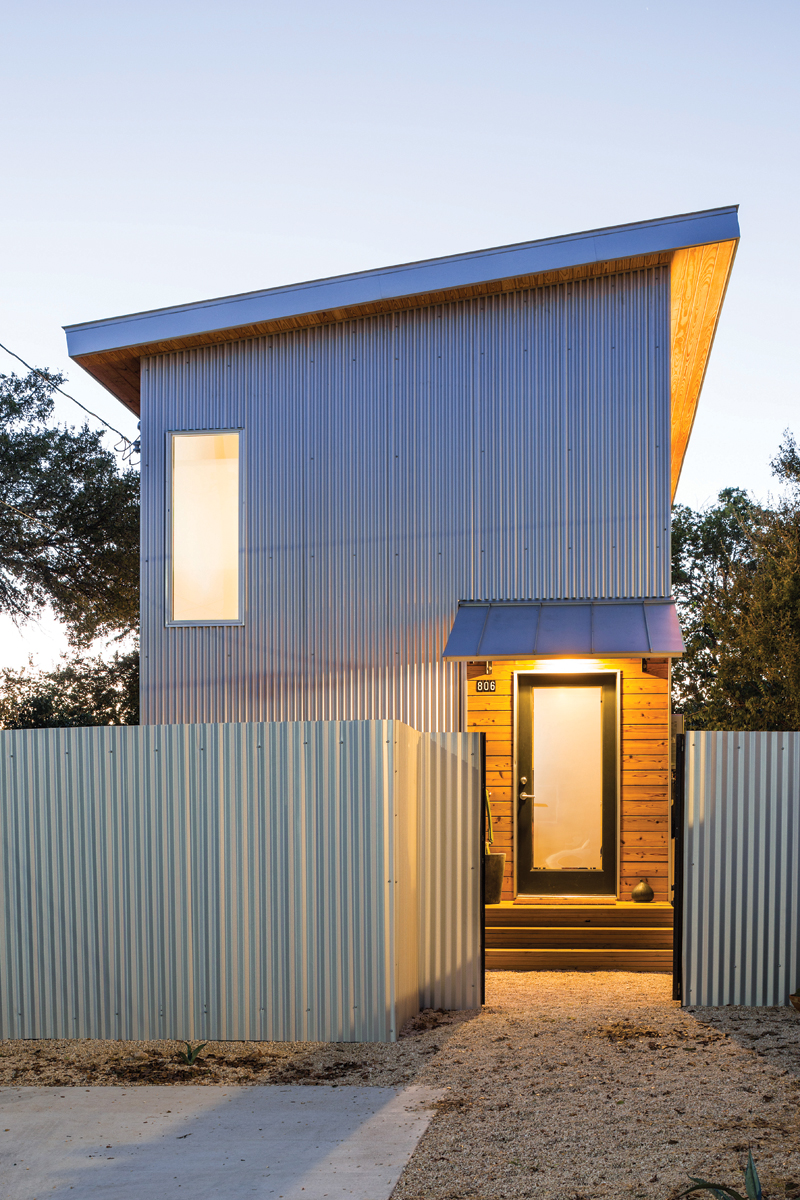 Frank Farkash, AIA, Greg Esparza, and Jeff Munoz founded Moontower not long after the 2008 economic downturn that left the AEC industry in crisis. With a strong interest in and appreciation for the housing typologies of Central Austin, predominantly built in the early- and mid-20th century, the fledgling firm sought to fill a niche by providing custom design-build services at a price point accessible to the young professionals flocking to the city. Though their decision to move to a design-build model may have been rooted in pragmatism as a means to increase their firm’s avenues for revenue, Esparza points out that it also “allows us to get to know our clients really well; to keep their priorities and interests in mind as we’re executing these projects; to do things that are particular to them and that take advantage of the existing houses.”

However, the challenges and benefits of operating through this project delivery method are often one and the same. “The buck stops with us, so there’s no out. It’s one of the advantages of separating the builder and the architect in that kind of traditional project delivery,” Farkash says. Yet it is for this reason that design-build typically works to the client’s benefit, since there’s only one accountable party. Esparza elaborates: “Once you get to construction, you might have 50-80 people coming through the site. While we’re orchestrating that process, it’s really valuable to have that relationship we’ve been building for six or eight months. It allows us to keep the client’s priorities front and center throughout the process, so that at the end of the project, the client feels a really strong sense of investment. The project really reflects them, their interests, and what they really care about through the design-build process.”

Moontower’s recent project 806 Lincoln is a testament to the firm’s foundations in that it provides custom design at a reasonable price. Though modest in scale and budget, the home doesn’t skimp on style. Apertures were strategically placed to create carefully framed vignettes while minimizing glazing. Polygal walls maximize natural daylight at a price lower than glass. Plywood subfloors were left exposed and finished to circumvent the material cost of hardwood. Off-the-shelf cabinetry boxes from IKEA offset the investment in the kitchen’s custom cabinet faces and blackened-steel backsplash. Esparza succinctly summarizes: “The craft of making spaces, framing views, using materials thoughtfully, really getting to know people, and having spaces that fit the way they want to live — all that can be done in smaller spaces and at more affordable prices.” 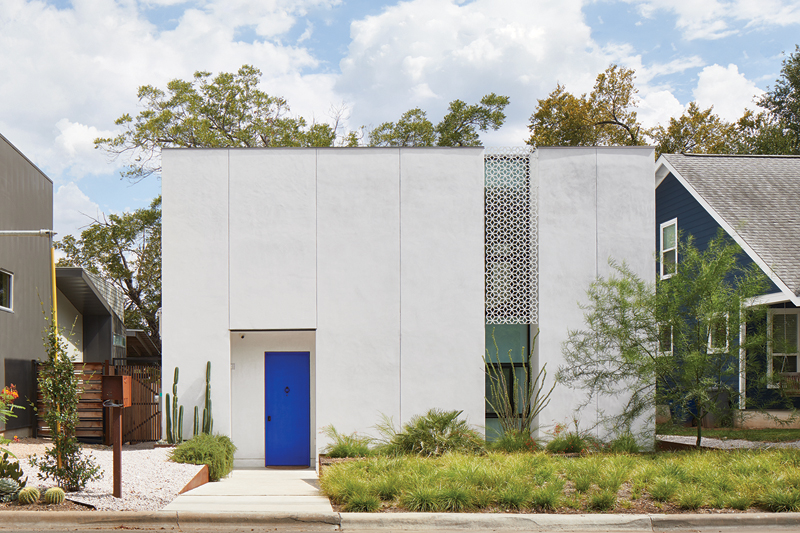 Austin-based firm Bercy Chen’s self-proclaimed passion for pushing the envelope is evident in the rigor they apply to learning new building technologies, materials, and trades. Design-build serves them well in that it allows them to operate under a laboratory-like framework, first testing new ideas on smaller projects before implementing them on larger ones. It also allows them to delve more deeply into their projects and gain a better understanding of the unique skill sets and techniques found within the local and regional trades. Their lead foreman, Roberto Becerra, is described as a master-of-all-trades, having expertise in steel, carpentry, flooring, tile, and roofing. With his oversight, the firm maintains a lean crew and a few strategic subcontractors to execute the construction of their projects.

“We have a lot of control over the final product, so it’s nice to see that what’s delivered is what we expected,” says Daniel Arellano, the firm’s head BIM specialist, who also has experience in construction management. “But, with that comes a huge responsibility. There are no excuses: You are running it. You have designed it. You’re running the development of it, so there’s no fingers to point — especially when you’re self-performing some of these aspects. We also have the liability of our people to consider, like job site safety, to not put them in harm’s way, which is something an architecture firm might not take into account.”

Though one of the benefits of the design-build process can be a shortened schedule made possible by overlapping design and construction phases, the firm tends to take a more traditional linear approach. “We never force our clients to go with us for design-build,” Arellano says. “We try to give a bid at the end of construction documents so they can shop it around. We’ll give them names of other companies that we like, as well. At the end of the day, it comes down to trust and the project delivery method. By that time you’ve been working with the project architect for six to nine months on design, so there’s a trust there. A lot of people like to take that, because the trust means consistency.”

Though it isn’t the firm’s typical approach, Casa Marrakech, another East Austin abode, benefited from the design-build process through a highly compressed design schedule. The tight budget afforded numerous opportunities for creativity during the design and construction processes. “There was no ‘build my dream home and then budget it back,’ so we were able to compress the timeline and get bids as they were coming in,” Arellano says. With a background in cabinetmaking, the client took a hands-on approach, designing, fabricating, and installing the millwork himself. He also worked directly with several stone companies to procure book-matched marble for the kitchen and bathroom at a reduced price. The money saved allowed for investment in signature architectural elements like the Moroccan-inspired metal panel work featured on the front and rear facades.

The next logical phase in the evolution of the one-stop design shop is already underway: development-design-build. Reeves reasons that “for those architects interested in becoming contractors, the first hurdle is assuming the financial responsibilities of the contractor to the client and to the bank. Once you accept that level of risk, it probably opens the door for more architects to become developers, as you’re not that far removed from spearheading your own project, whether that be a spec house or a small commercial project. Actually, we are doing that now.”

Bercy Chen has also begun taking this approach. The firm recently purchased a parcel of land in East Austin and is working on financing and design for a mixed-use development, which will serve in part as their new office. Arellano sees not just financial gain for architects going into real estate development, but benefits to their communities: “We have a better idea of what is needed in Austin, in East Austin, than a developer that comes from another part of the country who might not understand completely what that area will need to develop.”

While the liability involved with design-build may act as a deterrent for some architects, Reeves firmly believes architects are the ones best equipped to serve as contractors, because of their training in both design and building construction science. “At the end of the day, that’s what design-build comes down to. It really isn’t so much about the final product; it’s about the process, the stats, the procedures — all the decisions to get to that final product that form that process. The more architects that are contractors, the better,” he concludes. “To anyone out there that’s thinking about doing this, I couldn’t encourage the benefits enough. My honest desire is that more architects take this up and do it.”