A year after completing a 520-sf backyard professional studio behind their house in Houston’s East End (TA, January/February 2018), Ben Koush, AIA, and his husband, Luis de las Cuevas, found a vacant lot, 50 feet wide and 129 feet deep, in a working-class, Mexican-American neighborhood on the city’s Near North Side. The lot fronts on a one-block-long street in the North Main Street Addition that dead-ends into Little White Oak Bayou. The street is lined with modest, one-story wood houses built at various times during the 20th century. This turned out to be Koush’s dream location: secluded, yet only three blocks from the nearest Metro light rail transit stop, one-and-three-quarter miles north of downtown.

Koush extrapolated from his previous backyard studio when designing what, from the street, look like two Monopoly game houses. One of the dark-green-painted, clapboard-sided, gable-fronted structures is an open carport, its interior painted gleaming white. Alongside it, elevated four feet above grade, is a taller, green-gable-fronted companion with a recessed front porch, containing Koush’s professional studio. Koush explains that, spatially, the studio is a near-duplicate of his former backyard studio, lined with bookshelves on three sides, looking out to the north-facing front porch through three-foot-six-inch sliding glass doors framed flanking a central fixed glass panel, and incorporating rear pockets containing a side-by-side skylit bathroom and a storage compartment. The latter, Koush says, could be converted to a kitchen if the space were to become a dwelling unit.
What is not immediately apparent from the street is that the studio is the leading edge of an extruded, gable-roofed bar, 19 feet wide, that extends back through the depth of the lot parallel to the west-side property line. There is no direct access from the street-facing studio to the house behind. Instead, Koush chooses to walk to and from work each day along an open passage between the studio and the carport. (The carport has a back door, so much of the trek can be made under cover when it rains.) As are the driveway and the interior of the carport, the passage and the patio it leads into are surfaced with crushed white limestone. Koush reasons that because limestone is pervious and doesn’t require water, fertilizer, insecticide, or mowing, it is a more environmentally responsible ground cover than concrete paving or grass would be.

The interior patio is framed by the carport, the long west-side bar, and a perpendicular wing that projects to the east. In the patio, Koush’s 3-foot, 6-inch planning module is evident in the dimensions of the house’s floor-to-ceiling windows. Separating the back of the studio from the entrance to the house is a spacious, outdoor room, which Koush calls the “dogtrot.” At 21 by 19 feet in dimension, it is virtually an outdoor living room. After the house was completed, Koush inserted a wood lattice between structural piers on the west side of the porch to moderate penetration by the afternoon sun and screen views of the neighboring yard. Koush observes that the lattice still permits daylight to illuminate the space and doesn’t block the breeze. White-painted vertical wall siding and ceiling decking and a gray-stained pine plank floor give the dogtrot a tranquil feel. Koush used one-inch-square steel bar for the hand and stair rails on the side of the dogtrot. The cross walls within the dogtrot are aligned at an angle in order to preserve a native pecan tree on the property, making the space a parallelogram in plan rather than a rectangle. This divergence from the orthogonal creates a subliminal sense of volumetric expansion. 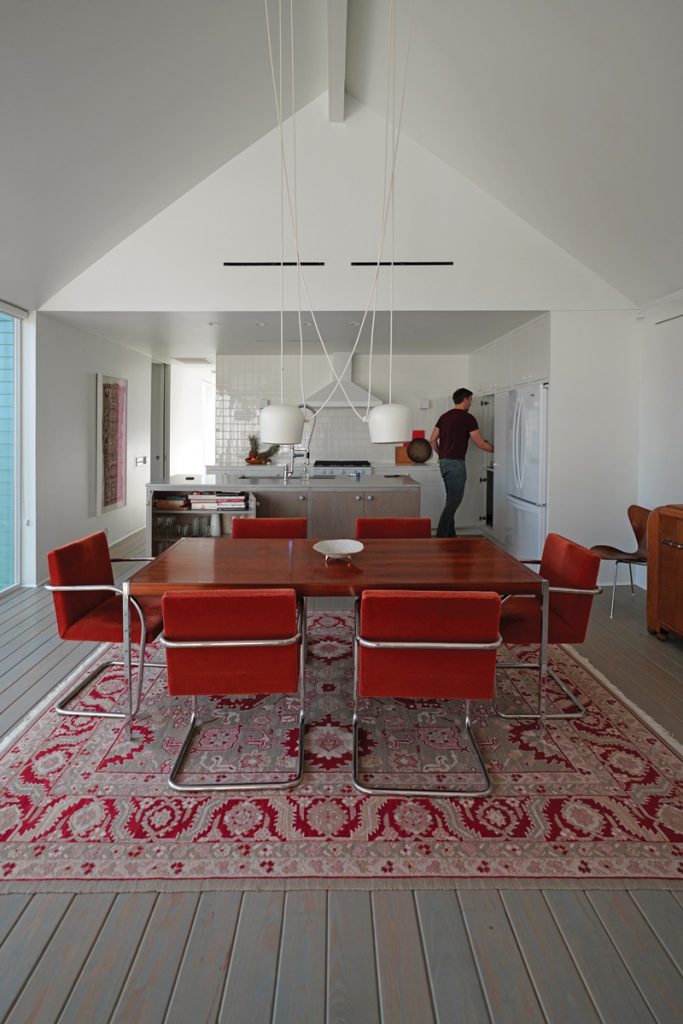 An open-air passage between the carport and the front-facing studio leads to the house’s central patio.

The house is simply organized. A living-dining-kitchen area is spatially continuous with the dogtrot. Koush spanned the space with a steel beam and kingpost tying into the house’s steel ridge beam to rigidify the open-gable roof structure. He installed projecting lighting fixtures to illuminate wall-mounted art, and he detailed the kitchen millwork to reinforce the space’s scale and proportions. The side wing and the rear of the west wing each contain a bedroom and an attached, skylit bathroom. (While Koush maintained a muted palette throughout most of the interior, he reserved architectural color for the bathroom tile.) The bedroom in the side wing is used as a painting studio by de las Cuevas. Between the kitchen and the back bedroom is a wide, deep closet where art and objects can be stored when not on display; Koush calls this space the “gift shop.”

The back bedroom contains the house’s only south-facing window, a square-framed aperture on axis with the passage connecting the two bedrooms to the front of the house. Koush says that when this window and the door to the dogtrot are open, the southeast breeze ventilates the house quite efficiently. Apart from the lattice screens in the dogtrot, there are no openings on the west side of the house. Koush is proud of his house’s environmental performance, which he achieved by constructing it with thick, insulated wall sections (2-inch-by-6-inch studs, drywall, sprayed foam insulation, and fiberglass batts). The fixed-glass windows incorporate solar shades. The stone-lined swale edging the patio channels rainwater runoff. Plantings (still in an immature state) were chosen for their environmental resilience and screening potential. Koush splayed the side walls of the studio’s front porch, embedded horizontal roof drains, and clipped roof eaves to maintain thin-edge profiles. 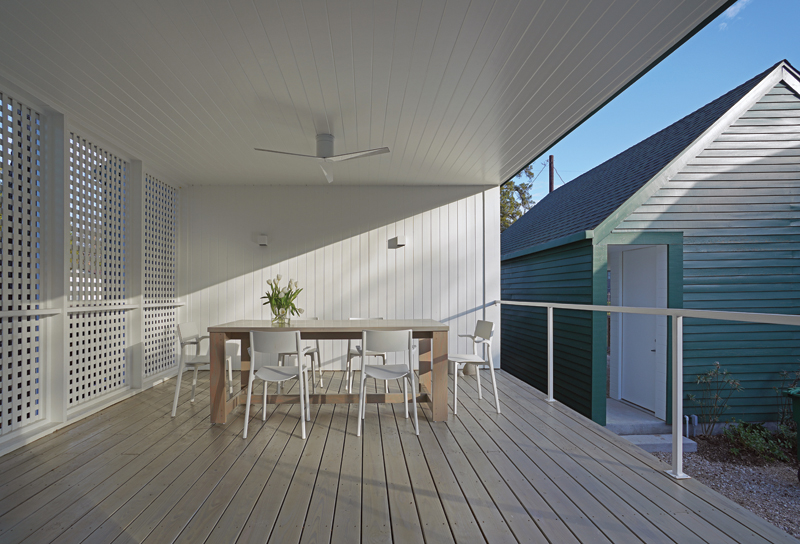 The “dogtrot” is a porch separating the house’s live/work components and expands into an outdoor living room.

Koush’s house and studio attest to the value of architect-designed houses: Beauty, economy, and stability reinforce each other, thanks to the conceptual clarity and material economy of his design. Some of his neighbors concur. Benjamin Notzon, AIA, designed the first new house in the Main Street Addition, in 2015. Across the bayou, in Glen Park Addition, Brett Zamore, AIA, Cameron Armstrong, Bernardo Ríos, and M+A Architecture have designed infill houses over the past four years, all located near SCHAUM/SHIEH’s White Oak Music Hall (TA, May/June 2017). Collectively, these buildings identify their formerly obscure neighborhoods as centers for ambitious new — and quite affordable — architecture in Houston. Unfortunately, they also tend to attract developers, who buy cheaply, build indiscriminately, and wreck the fragile balance between the ordinary and the exceptional that makes these neighborhoods so compelling.