In the last issue, I ended this column by suggesting that more diversity, promiscuity, and surprise in architecture might improve its outcomes. A week after shipping the magazine to the printer, I was sent a project that was very promiscuously diverse indeed, and yet I was surprised to find that it challenged my previous assertion.
The project, called Pier 2, was designed by the Montevideo office of Dallas-headquartered Humphreys & Partners Architects. It’s a conceptual design that was presented at the 2018 International Builders’ Show in Orlando. The convention’s organizers had asked Humphreys, which specializes in multi-family and mixed-use development, to come up with a scheme for an “apartment of the future.” Pier 2 was their answer.

At first, Pier 2 — which is depicted in glisteningly rich cocktail-hour renderings — has a certain appeal. It comprises two towers of modular units rising from a glassy retail podium and connected by two mid-level horizontal platforms, one a pool and recreation area, the other a vertical takeoff and landing (VTOL) airport. With its additive language of shifted boxes, which open up a variety of indoor/outdoor spaces for tenants, it evinces a kinship to Moshe Safdie’s Habitat 67 — a reliable crowd pleaser.

Keep looking, however, and troubles emerge. The building sits on a constructed island off the tip of Lower Manhattan, surrounded by a yacht marina, which, strangely for New York’s climate, features palm trees. The impression is that the building and its attendant pleasure craft just sailed up and docked. Is this an invading force, or a tourist cruise ship? Either way, it’s blocking the view of the Statue of Liberty. It also routes vehicular traffic through Battery Park to give the building a circular drive beneath its marquee entrance, effectively destroying one of Manhattan’s great public spaces. 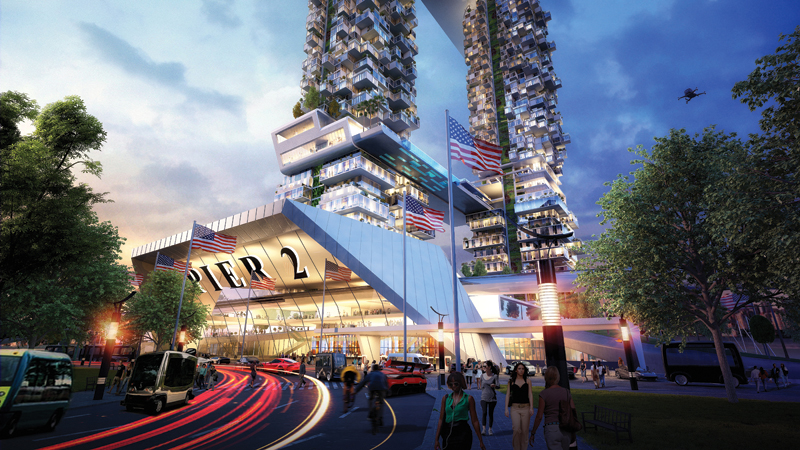 According to the press materials, the project is packed with “every amenity a futuristic apartment dweller needs to thrive.” At the base, there is automated parking, autonomous vehicles, full-service bike stations, and an Amazon Go store, while the recreational areas overlooking the harbor feature “special facial recognition technology for more engaging interactive displays and connectedness.” The lower portions of the towers house co-working and co-living spaces, while the mid-portions, above the recreation deck (which is outfitted with horizontal elevators) houses rental apartments — all supported by home automation devices. Above the VTOL drone platform are luxury condos, which are served by an “on-demand landing pad” that runs on tracks up and down the elevation. A video accompanying the presentation shows a man flying home from work. The landing pad slides down the tower, unfolds, and the VTOL aircraft touches down. The man steps out, suit jacket slung over his shoulder, and is greeted by his wife — a stunning blond — and their robot, whose screen-face flashes “Welcome!”

It’s a lot of stuff. After taking it all in and looking at the renderings again, the building resembles nothing so much to me as one of those monster sandwiches that Shaggy and Scooby-Doo would make. Instead of a whole loaf of bread, ham, ketchup, mustard, cheese, lettuce, sardines, marshmallow, fudge, and an olive on top, it’s a program stack of trendy real estate options smeared with the full range of sustainable and technological condiments.

If you didn’t just laugh, shame on you. But the analogy is more than just a gag. For those unfamiliar, the plot of every Scooby-Doo episode was more or less the same: A gang of four teenagers — Fred, Daphne, Velma, and Shaggy, plus their anthropomorphic Great Dane, Scooby-Doo — would drive around in the Mystery Machine investigating local legends. This usually landed them in a creepy old hotel or an abandoned amusement park, and they almost always discovered a disguised white guy perpetrator hoping to exploit the legend for personal gain, such as in a land grab or NIMBY action.

Pier 2 is that masked perpetrator, but rather than being scary, it’s seductive. It wears a cloak of techno-green. It’s “100 percent sustainable.” It looks cool and has a deft business strategy: the amenities and leasing options are diverse enough to appeal to the couch-surfing start-up wannabe skimming their roommate’s toothpaste and the billionaire who bypasses the hoi polloi and rides a VTOL drone from penthouse to yacht.

But pull off the mask and you find it clinging like a leech onto Lower Manhattan, walling off a cherished public park and turning its back on the city’s vibrant urbanism. You see that it embraces artificial intelligence and automation of home and transport wholesale, acting as a shill for big tech companies whose motivations are increasingly being revealed as nothing less than sinister.

I don’t mean to be too harsh on the architects who put Pier 2 together. After all, it’s a conceptual proposal, supposedly about the future (though most of its components are already with us today). There are many things to like about the project. The most troubling aspect to my eyes is not the specific elements that they employed, but the lack of critical assessment and handling of these elements they displayed in assembling (piling?) this Monster Sandwich. It’s a clear case in which promiscuous diversity surprises in a way that’s down-right spooky.