In the latter part of the 20th century, a group of architectural patrons built a significant collection of single family homes, many by noted architects, in the Dallas neighborhood of Preston Hollow. Among these are Frank Lloyd Wright’s Gillin House (1958), followed by the Beck House (1964) by Philip Johnson, the Whatley House (1984) by Edward Larrabee Barnes, and the Stretto House (1992) by Steven Holl. Stretto is not the least among these. Survey books compiling architecturally innovative residential design usually include Stretto, to the point that it has become a canonical work of Holl’s, despite his exhaustive output of breathtaking buildings in the years since. The house was commissioned by the descendants of Harold C. Price, who built the Wright-designed Price Tower in Bartlesville, Oklahoma. This family’s degree of connoisseurship, further evidenced by building Holl’s visionary structure, was and remains amazing.

The Stretto House is now in the hands of new owners with two young children. Requiring an expansion to accommodate their active family, they approached Max Levy, FAIA, who was Holl’s local architect on Stretto. The family’s work order included modest modifications to the original. Initially reluctant, Levy was ultimately convinced to take the project. He knew the house intimately and fully understood the potential pitfalls of altering an architectural icon. His watchword was “respect,” and his approach deliberate and careful.

Levy’s design eschews the expressive formal vocabulary of Holl’s design, but adapts the material palette: burnished concrete block, aluminum panels, lead-coated copper, steel-frame windows. As with the original house, the various building materials have coded roles organizing their use in the new building. The concrete block is in a longer, more linear proportion better suited to the low-slung roof and prevailing horizontality of the addition. Sanded aluminum panels clad non-service spaces, their dull gray exhibiting a surprising amount of reflectivity and life. Lead-coated copper again is used for the exposed roof edges. Finally, the steel frame windows and doors return, often in the form of a static glazed screen (the glass connector to the original house) or as moving walls (at the screen porches and bedrooms). 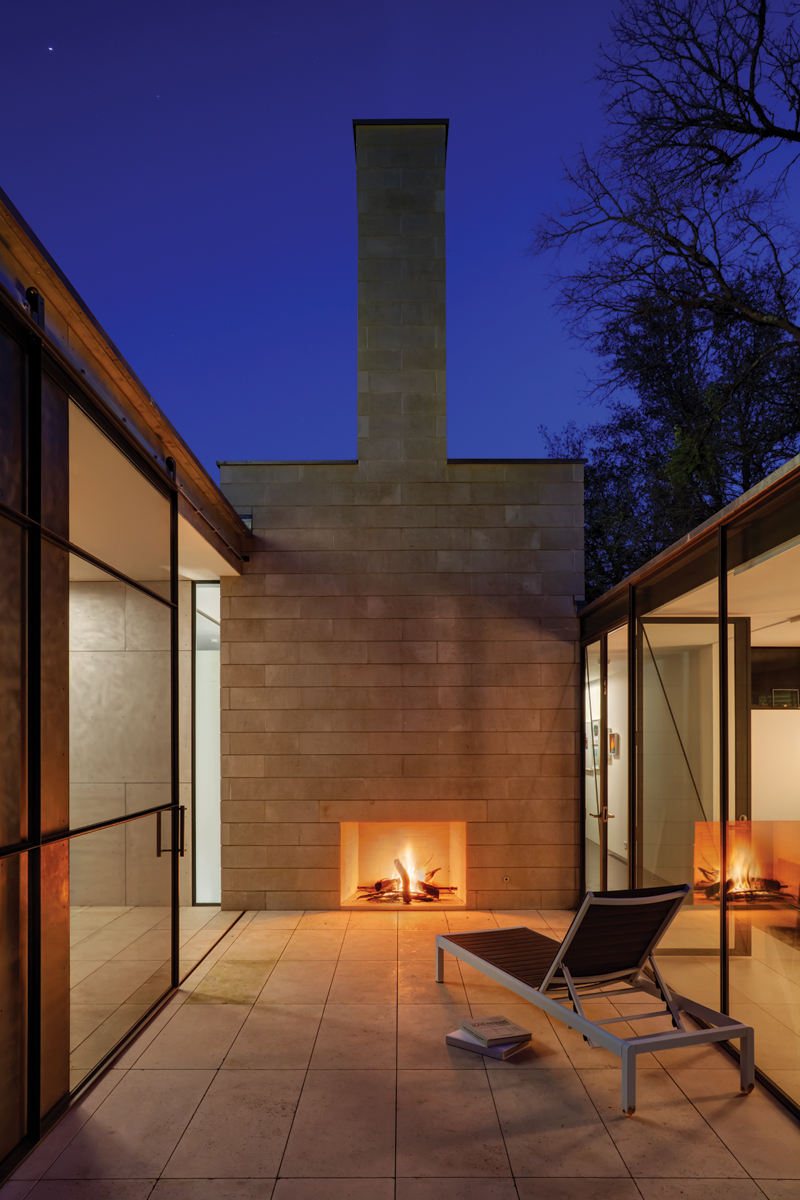 Open to the sky, the visually quiet and contemplative fireplace court is lined with operable glass and screen panels along the sides, expanding the space into the house itself. Finished in CMU, it is a narrowly proportioned, Kahn-like space. PHOTO BY CHARLES DAVIS SMITH, FAIA

Finding ways for his architecture’s users to engage the building beyond just inhabiting the space has always been part of Levy’s mission. At Stretto, the most overt architectural gesture that animates an otherwise simple form is the presence of enigmatic, cylindrical light monitors that sit atop the flat roof. They are compelling as formal objects and serve as delightful counterparts to the otherwise typical though well-organized composition. There are three of them, glass drums that allow top light to enter each of the bedrooms. To control glare and direct light, they are fitted with a rotating shade. Levy calls these shades “light sails.” They can be used to shield specific solar rays at various times of the day and are expressed in the rooms as rotating masts that, when twisted, adjust the shade above. Sliding panels set into tracks in the ceiling with their own detached pole for operation can be slid into place to close the drums off completely when darkness is required. On a sunny day, the spaces are filled with light — an uncanny feeling inside such a substantial structure.

The addition uses the Stretto House as a foyer: You can only enter by passing through the main public spaces of the existing house and an art gallery that is now a transitional passage. Once in the glazed connecting gallery, you experience the site entry sequence in reverse, looking back toward the motor court and the main gate. A bench seat and a bespoke art piece make moving through this passage eventful and memorable. One animating vignette is a slice of the arching carport roof, visible through the glass as a reminder of how the original house differs from the addition.

Strong plan geometry has always been part of Levy’s work. Here, the plan unfolds as a series of interior and exterior spaces opening rhythmically off long passages. The plan doesn’t reveal itself until you move through it, entering the various spaces to understand how it flows and is organized. The Stretto House unfolded with a shifting path that moves in a linear fashion though the house. The spaces are taller and more expansive and provide tantalizing views of what’s ahead as you move from space to space. Levy has contrasted this with a series of more private and discreet spaces — fitting, in that the addition is primarily composed of bedrooms. 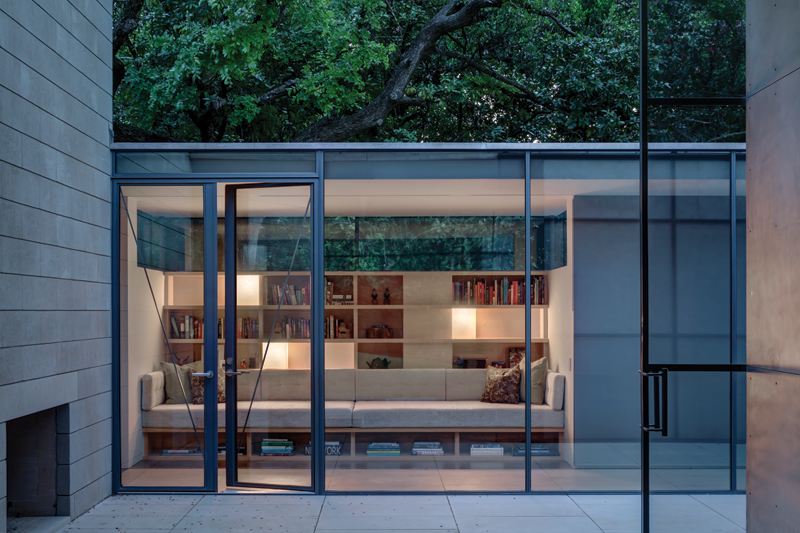 Along the corridor, a banquette surrounded by bookshelves is an inviting place to relax and read. Opening a door in the glass wall accesses the central courtyard, positioned to bring light into the center of the addition. The direct exterior connection is integral to the way the spaces unfold and are used. PHOTO BY CHARLES DAVIS SMITH, FAIA

Each bedroom suite has a corresponding exterior room that is at once its counterpart and its “window.” Here, Levy uses another Holl device — the diagonal view. The glass walls that open to the porches are actually sliding screens that open up the corners. They are on the diagonally opposite corner of the room from where the space is entered, and command a sweeping view to light and green beyond.

To maintain the same finished floor elevations throughout the addition, the house nestles into the topography. The bedrooms open to the lawn, but the corridor at the rear has only clerestory windows. This enhances the sense of privacy and makes emerging into the bright and open bedrooms more gratifying.

The master bath and closet form a miniature building unto themselves to one side of the motor court. Long and narrow, the closet is fitted with millwork clothing storage that conceals all of its contents, except for small cases that display selected objects like artifacts in a museum. The space is illuminated by crisscrossing beams of light, courtesy of a series of linear skylights set into the roof. At once open and cheerful, the bathroom has the same disarming presence of light that the bedrooms enjoy. The vanities and their mirrors become sculptures in the spaces, all the more appropriate due to their half-round form and placement in front of frosted glass windows. The sense of being outdoors is enhanced by the placement of a private court with its own shower visible through a glass wall at one end of the bathroom.

There is a Kahn-like space at the center of the addition, faced in block and open with glass walls at one long side: Roofless, it is tall and narrow, with a simple fireplace and its impossibly narrow chimney at one end. It serves a functional role, bringing light into the heart of the new building, but it also creates a quiet counterpoint to all the more engaging architecture going on around it. The courtyard is best considered from a built-in seat set into the wall of the corridor. Surrounded by shelves, it’s a de facto library. Levy says such areas soften and warm modernism. The space certainly proves that a room without a view can be a very beautiful place, indeed.

Michael Malone, FAIA, is the 2018 chair of the TxA Honors Awards Committee and the Ford Medal Jury.