Magnolia Montessori For All had a vision. They wanted their school to feel like a village in the forest. Larry Speck, FAIA, took that concept one step further. He saw a Norwegian sea village, full of pockets. “Not too many pockets, Larry,” said Sara Cotner, the organization’s founder, “— ’cause they’re gonna hide.”

Over the course of their selection process, the school spoke to eight firms — a large number for a project of this size. “They’re very intelligent,” Speck says. “It was eight really good firms.” Most of the firms were known primarily for their residential and educational work. Page was the unanimous decision due to their extensive background in school design and their equally impressive residential portfolio.

At the core of the Montessori curriculum, which was developed in Italy in 1907 by Maria Montessori, are notions of freedom and individual choice. Page architects worked with the school’s founders and teachers to demonstrate the architects’ understanding of Montessori’s core components and to create a building that would reflect instructional priorities. According to the American Montessori Society, these core components are: properly trained Montessori teachers, multi-age classrooms, use of Montessori materials, child-directed work, and uninterrupted work periods — notably different from the average public school.

The school sits on a sloping site in a largely undeveloped part of northeast Austin, although that is changing rapidly. Where there used to be a forest that abutted the school, now there is a construction site. The school’s front office and only entrance are at the top of the hill, with classrooms and courtyards nestled into the slope. A fence surrounds the property, giving the students more freedom to roam the campus.

A material palette of concrete floors, white walls, and natural wood stands in stark contrast to the usual primary colors and linoleum. Cotner describes this as a trauma-sensitive design — the materials are calming instead of jarring and allow the traditional Montessori teaching tools (beautifully designed, scientifically crafted didactic materials) to take center stage.

While the school has a multi-purpose room, there is no centralized cafeteria. Instead, students pick up food from a kitchen and take it to their classrooms, which they work to set up like a restaurant. Next to the kitchen is a laundromat, where students go to do their class’s laundry. Cotner jokes that this is the college prep portion of the curriculum. 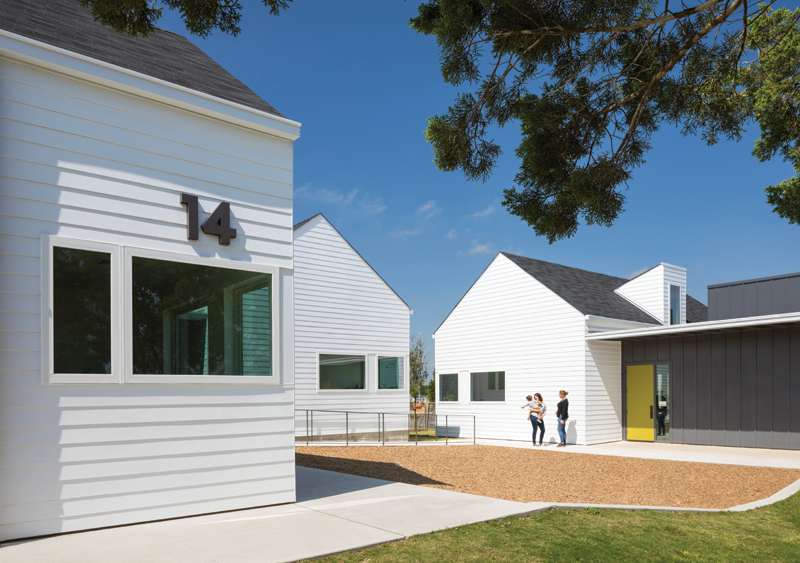 Classrooms connect with the wider campus through a series of back gardens, courtyards, and playgrounds. Photo by Albert Vecerka.

If the campus is a village, then each classroom is a house, no two exactly alike. Shelby Blessing, AIA, says the design team approached the project from this perspective, wondering, “How can we make it feel the most comfortable and familial for the students and the teachers?” Instead of being focused around the all-important teaching wall, the rooms are nonrectangular. One wall of windows faces a private back porch and garden for each individual classroom. The classrooms are multi-age, and students stay with them for three years. This arrangement is meant to foster continuity of care, another means of reducing trauma, and to achieve the Montessori goal of giving classrooms a residential character.

In fact, Cotner says the first reaction of many families to the classrooms is to say, “This feels like a second home.”

The school and its students were involved in the design process from the very beginning. With a field trip to the Umlauf Sculpture Garden already in the works when Magnolia Montessori selected its designer, Page jumped into action. It turns out that Page principal Larry Speck had worked on the Sculpture Garden project years before — so Page volunteered to lead the tours. This gave them a golden opportunity to talk to Magnolia students about their design process. It also succeeded in making Page part of the educational community of the school.

Magnolia Montessori also established a committee of eight to 10 parents and teachers to provide input on the project, including some architects. “It was a thorough immersion in both their administrative- and board-level vision for the school, but also grassroots from students and teachers,” Speck says.

These conversations had a direct impact on the final project. “We were really working through things that are not common in a public school classroom at all,” Speck says. This situation made teacher feedback doubly important. Specific design decisions can be traced back to specific teachers. For instance, “there’s a totally different attitude towards bathrooms,” Speck says. In the Kindergarten-age classrooms, bathrooms have Dutch doors so that teachers can open the top half to make sure students are safe while still maintaining their privacy. At every age level, teachers had suggestions to help make the classrooms comfortable for the students, resulting in subtle differences in each of the villages’ age clusters. The scales of the rooms change along with the ages of the children they house, with ceiling heights increasing a foot from the classrooms for 3-, 4-, and 5-year-olds to the classrooms for 6-, 7-, and 8-year-olds. All of the classrooms also have an area for cubbies and a window seat, a kitchen, and a dormer window. 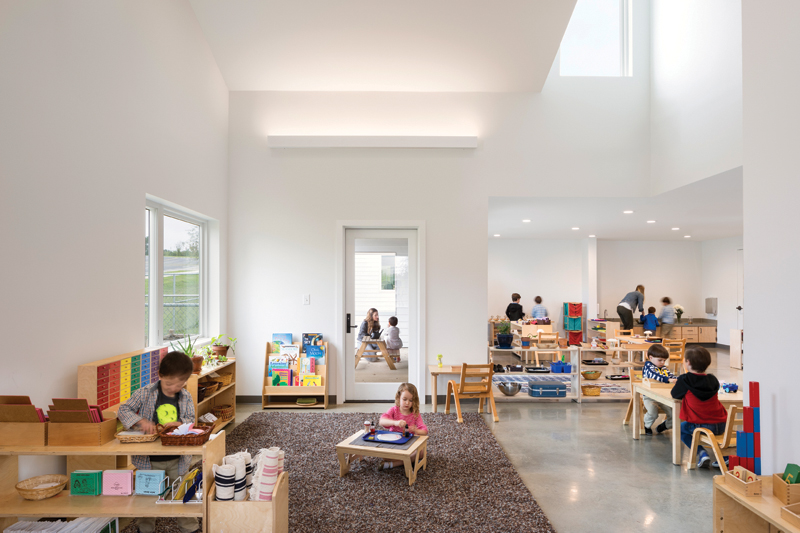 The classrooms change with the ages of the students, ensuring everything is appropriately scaled and fit for their developmental needs.
Photo by Albert Vecerka.

The campus takes advantage of every inch of the site by integrating the indoor and outdoor spaces, again inspired by teacher wish lists. “We had to really make sure that we understood how they wanted it to work: Is it just going to be something that sounds cool or are you actually going to use it?” Speck says. The final result is a patchwork of indoor instructional space and outdoor play areas, helping to integrate the different groups of students. The infant and toddler playground sits directly at the
center of the campus, on an elevated slope that puts the students at eye level. “All of the older students walk by at departure time, and the toddlers think it’s a parade just for them,” Cotner says.

Each classroom also has some version of a back garden, with younger students having a small class planting area and older students having a mixture of community garden and natural outdoor space. In order to make the spaces work, it was important for the teachers to be able to supervise both indoors and outdoors at the same time. The spaces are visually connected via large windows and sightlines. “The outdoor areas are protected and secure,” Speck says. “There are nested secure environments in the whole complex.”

The project was not without challenges. “The world doesn’t want you to make a school into a village. It wants you to make it into big chunky buildings,” Speck says. And even villages need things like fire lanes and retention ponds. To maintain the intimate feeling of the campus, the retention pond also serves as a soccer field; the fire lane is incorporated into one of the school’s two playgrounds.

The project was also on a tight budget, which resulted in a lot of value engineering and a number of unfulfilled dreams. The residential scale of the project however, made it more cost-effective than more institutional public schools.

While it was being built, many of the school’s neighbors thought it was a new subdivision. Now that it has been completed, and on a scale compatible with the nearby homes, it is an asset to the community, a second home for 500 students with a waiting list of 600 more, and an example of non-traditional, collaborative school design.

Hi – thanks for the great article. Just FYI – Page was the Architect of Record as well – not Method. Thanks, Meredith Contello, AIA

So sorry about that! This has been corrected. Thanks!