Upon entering the Dallas Arboretum, one cannot help but be captivated by the entry sequence through the Trammell Crow Visitor Education Pavilion and Entry Plaza. Lake|Flato’s design, at 15 years young, sets the tone for the visitor experience. The architecture, grounded in limestone, evokes the bedrock below, while overhead shade canopies blend seamlessly into the sprawling boughs of the park’s trees. It is a subtle yet captivating arrangement that serves the Arboretum’s mission as a botanical sanctuary and public asset for Dallas.

Unlike the Trammel Crow Pavilion, which sits front and center at the public’s initial point of contact, the new Charlotte and Donald Test Pavilion is a place to be discovered deep within the Arboretum. Some discover it on their journey through the park, while others glimpse it as a backdrop when passing by on White Rock Lake trails. During the daytime, seen from the lake, it appears nestled in the shade of the trees. At night, it emits a soft glow, mimicking the residential character of the surrounding neighborhood. 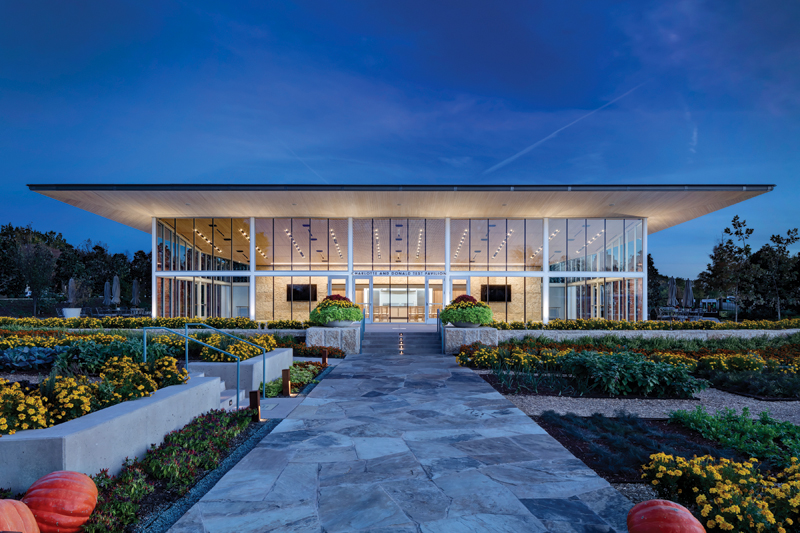 As an architectural statement, the Test Pavilion, designed by Buchanan Architecture, is an evolution of the ideals rooted in the mission statement of the Arboretum itself: “The mission of the Dallas Arboretum and Botanical Garden is to build and maintain a public venue that promotes the art, enjoyment, and knowledge of horticulture, while providing opportunities for education and research. We are committed to excellence, good management, and fiscal responsibility.”

Build and maintain, it does.

As focal point within the surrounding A Tasteful Place garden, the program and mission behind the Test Pavilion emphasize the community’s need for an educational experience focused around regional and sustainable food production. “The intent of the garden is to exhibit ornamental plantings of seasonal vegetables, herbs, fruit and nut trees, and other specialty plantings,” says Chuck McDaniel, managing director of SWA’s Dallas office, which designed the garden. “These plantings allow visitors to expand both their knowledge of plants and the possibility of their own gardens by showcasing foods which can be used in daily meal preparation and their individual residential garden designs.” All of the plants around the pavilion are edible and thrive in the Texas climate. A series of potager — a French term for ornamental or kitchen gardens — creates a grid procession that leads toward the pavilion. “The master plan of the site created a space for the pavilion along the southern edge of the garden,” Buchanan says. “Through a collaborative process, we were able to orient and align the pavilion with the geometry of the potager gardens immediately to the north.”

Initially, there were no plans for a pavilion in this place. Rather, the garden would rely on the Trammel Crow Pavilion in combination with an outdoor covered display area. Later, a donor funded the Test Pavilion as a multipurpose venue. The vision evolved into an expanded program able to host events and demonstrations, with a full broadcast studio capable of connecting the garden’s mission with the world. Martha Stewart, a recent recipient of the Arboretum’s Great Contributor to Art Award, was one of the studio’s first users.

The design of the Test Pavilion went through several evolutions during the five-year process required to complete it. “The design process began with a more organic shape in plan that responded to the sweeping gestures of the landscape layout,” Buchanan says. “As the project developed, a more rectangular form emerged in response to budget considerations.” Adaptability became a key feature of the project’s viability, hence the change from an elliptical plan to a rectangle. Buchanan employed a 4-ft-x-4-ft grid — a hallmark of his portfolio. “A 4-ft-by-4-ft building module grid is an organizational tool we use in a lot of our work,” Buchanan says. “It is a concept that is intended to make the best use of common sheet sizes and reduces waste and labor.”

A flying roof, clad in cypress, gives the pavilion a formal connection to the arboretum’s trees, its jutting wings resembling overarching limbs. A flush-mounted storefront system draws the gaze into a limestone core that houses the kitchen. This solid “trunk” is clad in a 2-ft-by-4-ft grid of Lueders Limestone — a larger module than is found in the existing architecture on campus. This difference betrays the pavilion as a new addition. The materials also speak to the regional nature and sustainable mission of the garden. “Lueders limestone and cypress wood planks from Longview are part of a larger palette of materials intended to promote sustainability,” Buchanan says. The upward slope of the roof conceals a sizeable rooftop mechanical system.

Solid wood sliding doors in the limestone core open to reveal the kitchen, whose equipment can be moved into the room for demonstrations and classes. There is also an array of media equipment, including studio lighting and backdrops, which allows the space to function as a broadcast facility year-round. Service and support spaces are also tucked within the volume, along with an additional catering kitchen for events.

The central limestone core houses the tasting kitchen. The stone cladding is scaled up to convey a monolithic presence. Photo by Charles Davis Smith, FAIA.

The Test Pavilion captivates through its scale, simplicity, and quiet stance. After multiple visits, observing the building from different vantage points as it was being used by a variety of crowds (April seems to bring out the entire city, on a daily basis), its harmony with the gardens and landscape was undeniable. Even while in use, the pavilion’s glass surface reflects the potager gardens, creating an impression of infinity. Much like the small entry pavilion designed by Murray Legge Architecture a few years prior, what makes this particular piece of architecture special is that it does a lot with a little, showing the power that simplicity has, when informed by the right moves.