To meet increasingly rigorous energy codes, architects use modeling tools throughout the design process. These tools and strategies are becoming as familiar as concept models, specifications, programming documents, and other pieces of the architectural trade. The struggle has been to find ways to communicate the information provided by sustainability metric tools in a clear, thoughtful, and revealing way. The graphics on the following pages represent the fruits of that struggle, tracking the design process from early-concept massing and fenestration details to post-occupancy measurements, AIA-2030-Challenge reporting, and even internal audits of firm practices. The data is invaluable for testing designers’ assumptions and giving teams and their clients new things to think about. The graphics help to communicate those things to a larger audience. 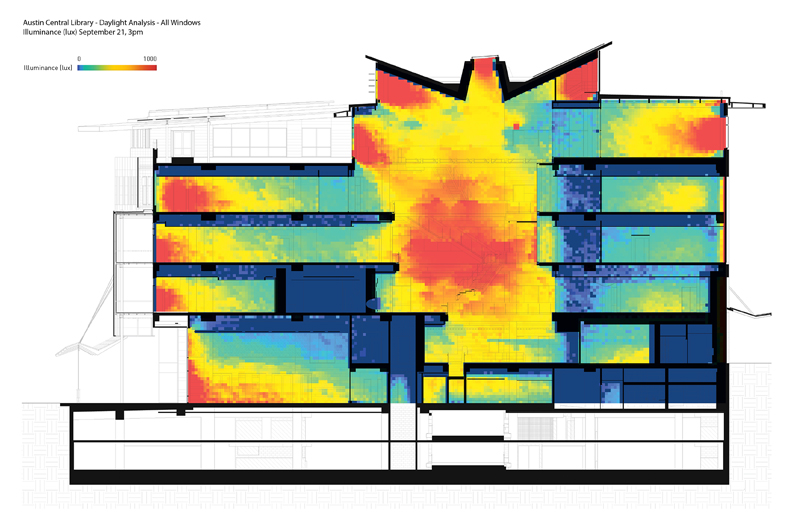 The new Austin Central Library set out to be the best day-lit library in the United States. Often, daylighting evaluations are represented as plan graphics with illuminance overlays. For the library, the section was as essential, if not more essential, than the plan. The design team used plans, sections, and 3D models to test the effectiveness of window and skylight configurations. 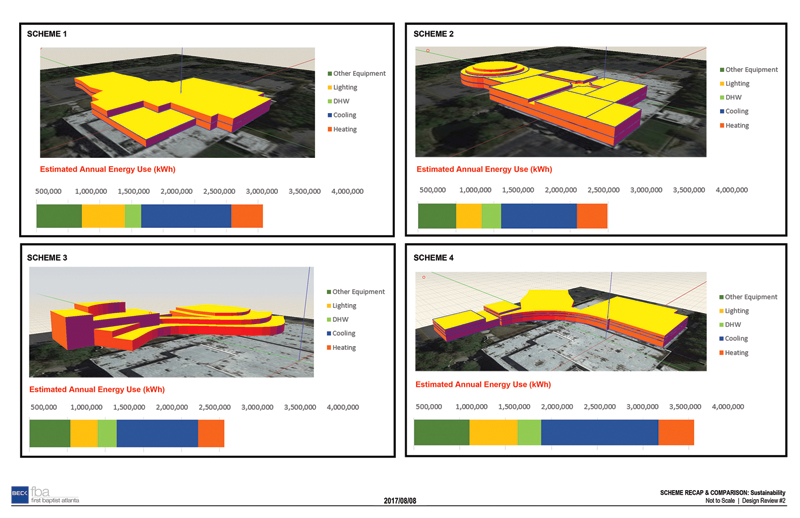 One of the most effective techniques in the design of a new building is to consider energy use from the very beginning of the design process. The way a building sits on its site and is oriented to the sun; prevailing breezes; and other site qualities, including the very site the building occupies — all these factors influence the energy use of the structure in dramatic ways. Architects often use energy modeling during the concept design phases to determine the massing of the structures they design; this information determines the form of the building, enhancing its performance. A church in Atlanta, Georgia approached Beck to do some studies to evaluate their existing building and help determine how much of it to demolish and how much to keep. The design team tested four schemes with various site orientations and relationships to the existing structure. In this graphic, Scheme 1 uses the existing building in its entirety with a small addition, and Scheme 3 replaces the existing building with an entirely new structure. Schemes 2 and 4 each use roughly 50 percent of the existing building. The design team looked at energy use across a variety of features such as lighting, water heating, and HVAC. 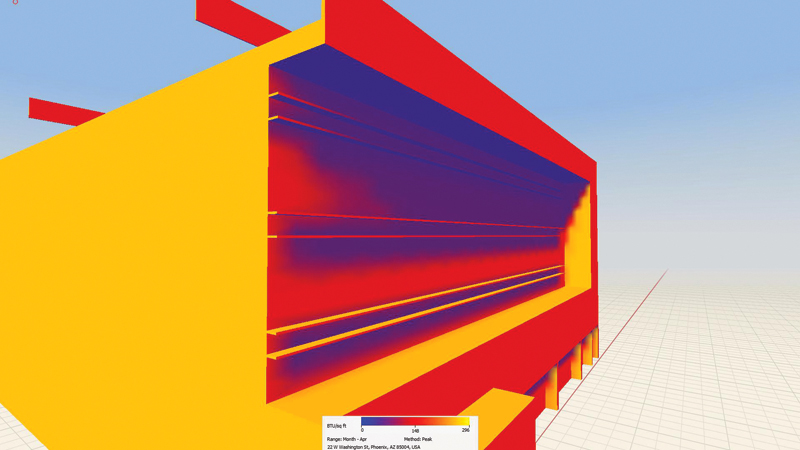 A building that is carefully day-lit can save significant amounts of energy by cutting the need for electric lighting, and also by optimizing the amount of light let into a space while mitigating both the positive and negative effects of solar heat gain. In Texas, where the sun is bright most of the year, the challenge is to bring in natural light while limiting the amount of solar insolation, or radiation from the sun hitting a window surface directly. This direct hit from the sun can increase cooling loads significantly, leading to increased burden on mechanical systems. For a project in the Southern U.S., Page analyzed solar insolation on a south-facing glazed facade during the early design phase. By testing various depths and spacings of horizontal shading devices, the design team was able to find a cost-effective solution to present to the client. The contrasting red and blue colors overlaid on the facade make it clear where the devices are most effective (blue is where the sun is being blocked). One can see that the large overhang is quite effective at providing shade to the windows below. 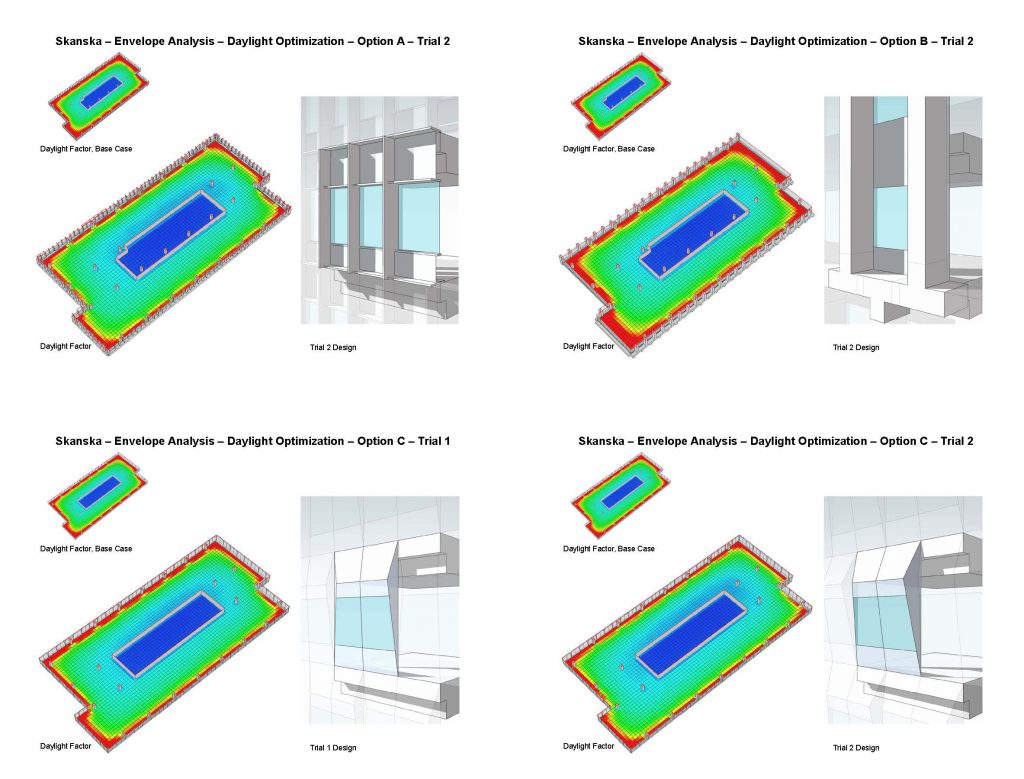 Historically, one of the biggest contributors to energy use in buildings has been electric lighting. To cut down on a building’s reliance on this form of illumination, designers have resorted to creating naturally day-lit spaces. This has to be done carefully, to optimize light levels for certain tasks while minimizing glare and its associated discomforts, as well as solar heat gain. For a core and shell office building in Houston with rigorous sustainability goals requested by the client, the design team at HOK tested several different fenestration options in a process called “facade optimization” during late schematic design. This process balances different qualities of a building envelope to achieve high performance. The graphics here show a plan view with an overlay of illuminance levels, to pinpoint where problems might occur at different times of year. The graphics here represent a single option tested for various times of day during the spring equinox. The plans were compared to a “base case” of no shading treatment to determine the effectiveness of the designed shading devices. 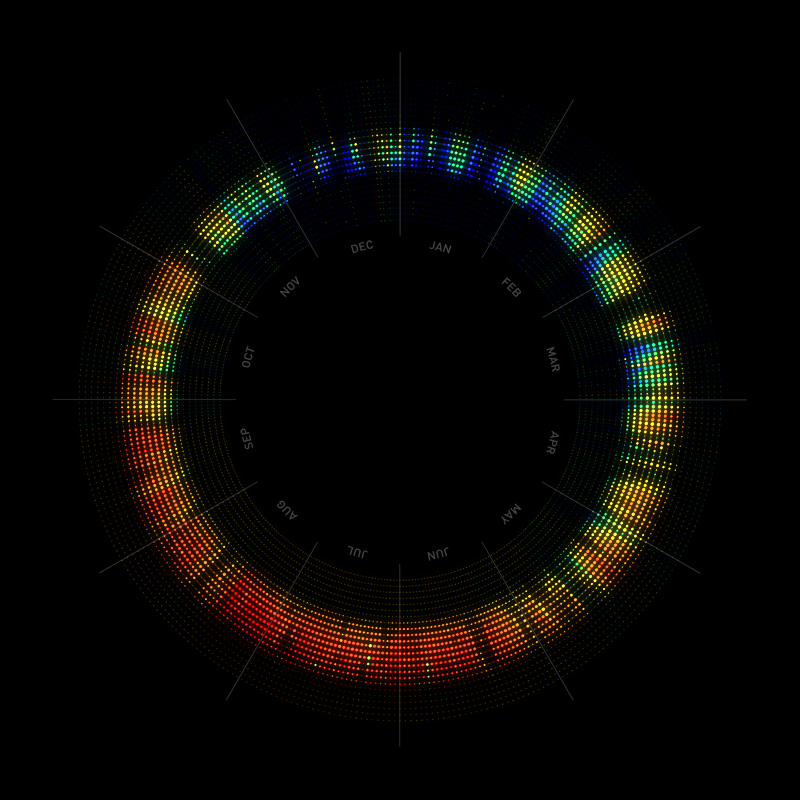 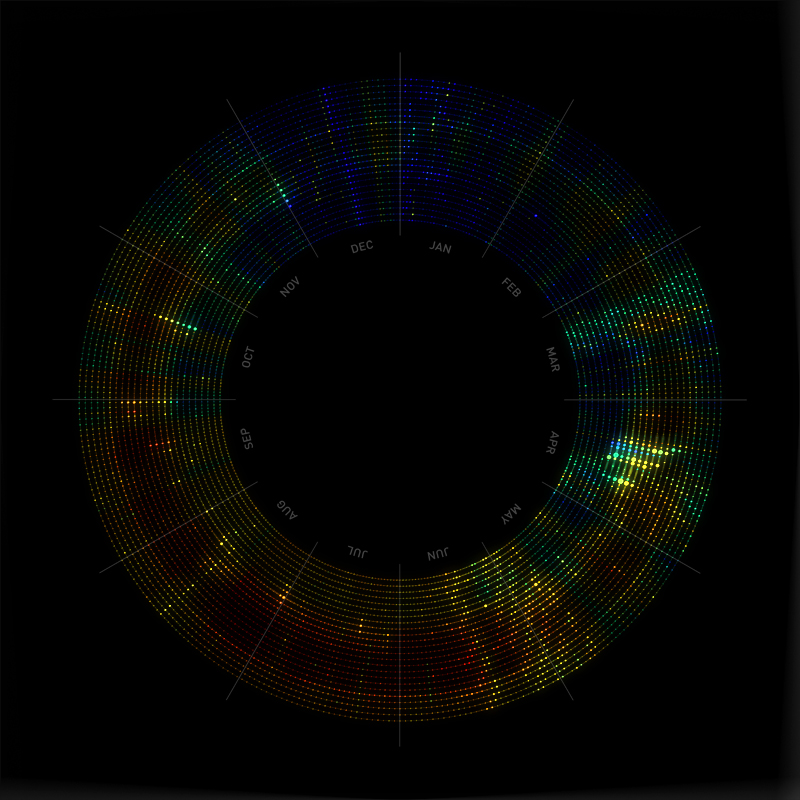 Energy models are only as reliable as the inputs and assumptions that go into them. Energy modeling during the design process can tell us only so much about a building’s performance. The real test lies in the post-occupancy measurements. This data can either support our assumptions, or teach us new things to consider in our future projects. In the case of the Josey Pavilion, the data did both. The Josey Pavilion is a wood-framed structure in North Texas primarily utilized for its classrooms, event space, restrooms, catering areas, and its small library. The building was certified as a Living Building in 2016: It performs at net zero energy and net zero water. The graph on top shows the energy production, and the one at bottom shows energy use, across a year (winter months are at the top). As predicted, the solar panels collect more energy during summer months, as can be seen by the wider band at the bottom of the graph on the left, and dark bands in this graph represent times of rainfall, when the panels did not produce as much energy due to cloud cover. For the energy consumption graph, the opening day in October is represented by a bright line of energy use. To the surprise of the design team, the energy use spiked in the spring, when there was significant enough rainfall to make the pumps run overtime for wastewater treatment. 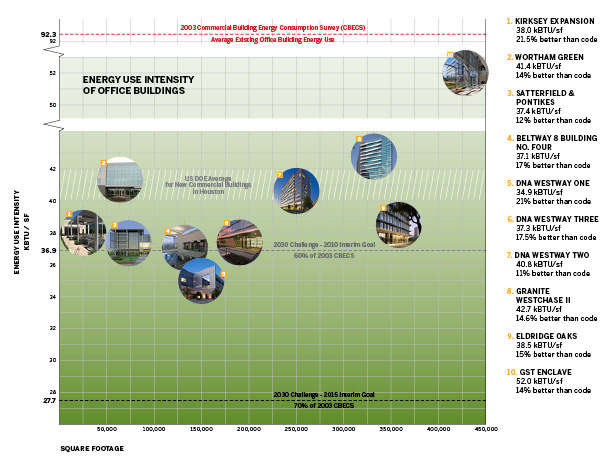 For architecture firms that have signed on to the AIA 2030 Challenge, tracking and reporting the predicted energy use of all projects across the firm is an important annual task. The graphic here shows the predicted energy use intensity of Kirksey’s Houston office buildings, relative to the 2030 Challenge goal for 2010. Architects at Kirksey found the reporting process to be a good opportunity to educate staff about the performance of the buildings they design, relative to other projects in the office, so they hung this wall-sized graphic in a prominent circulation area of Kirksey’s Houston office. Each building is graded based on its orientation relative to an east-west axis, its window-to-wall ratio, whether it has adequate shading devices, its glazing type, lighting power density, and the efficiency of its HVAC systems — all characteristics that contribute significantly to a building’s energy use. Like several larger architecture firms, Kirksey performs all of its energy modeling in-house; its staff has higher sustainability aspirations than do most outside consulting engineers, and they can drive designs to perform better. One of the greatest challenges in the design of this type of building is overcoming the decades-old perception that tenants always desire floor-to-ceiling glass. Because of this assumption, clients — almost always brokers, rather than tenants who occupy the spaces — drive new office buildings to be huge energy hogs. One of the biggest advantages of the new statewide energy codes is that they force design teams and clients to find other ways to design office buildings than defaulting to an inefficient curtain-wall envelope. 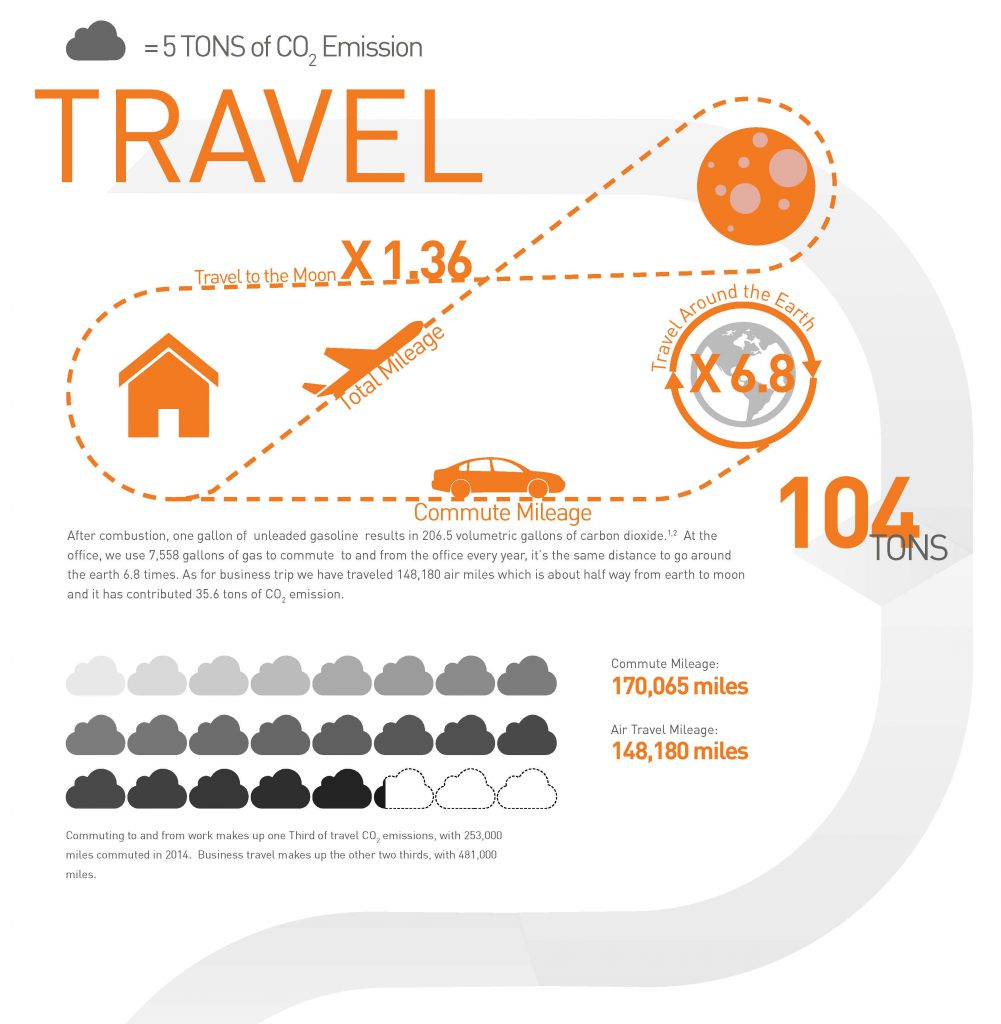 The drive for better-performing buildings goes back to a desire to reduce carbon dioxide emissions, which are the biggest contributor to climate change. One of the ways that architects keep themselves honest is by looking at their own patterns when it comes to energy use. Since 2015, after moving into their new office space, Overland Architects has done an annual audit of their habits that includes measuring their waste, water use, electricity use, travel habits, and paper consumption to produce a tally of how much carbon dioxide they are contributing to the atmosphere. They compile their findings into an infographic to educate their staff and bring awareness to individual habits. Their total carbon footprint in 2016 was 195.3 tons, which translated to an average emission per person of 3.1 tons annually. One of the biggest sources of emissions that year was from commuting, and this, together with air travel, was responsible for the largest amount of CO2 emissions by far. This graphic is an excerpt showing the contribution of travel to the overall CO2 emissions. This awareness, coupled with incentives and encouragement for people who walk, bike, or take public transit to work, has resulted in an increase in bike ridership such that Overland’s current bike rack is overflowing and in need of expansion.

Margaret Sledge, AIA, is a designer at Lake|Flato in San Antonio.