At the end of World War II, Austin was a city of 138,000 people and was quickly outgrowing its 19th century power infrastructure’s capacity to supply an adequate amount of electricity. The population was swelling, as were its inhabitants’ individual demands for energy, this latter fed by a booming national economy and a sudden profusion of household appliances. The Seaholm Power Plant was commissioned in 1948 to satisfy this newly created appetite. Erected in two phases — the first completed in 1951 and the second in 1955 — the facility was named after Walter E. Seaholm, a municipal administrator who played a vital role in upsetting a 1927 bid by the privately held Texas Power & Light Company to take over the city’s power generation. (Austin has held this utility since electricity first appeared in these parts in 1893.) Kansas City engineering firm Burns & McDonnell designed the plant, taking some care with the architecture of the turbine hall, whose cast-in-place concrete structure is well-proportioned with some minor Art Deco flourishes. Symmetrical and stately, looking every bit the civic edifice, with Italian cypress trees punctuating the human-scaled facade, it sits today beside downtown put to a different purpose, gazing upon Lady Bird Lake across a manicured lawn.

In 1989, Seaholm spat out its final watt of energy. Old and inefficient for a power plant, it had long since been outmoded by a larger, remotely located, less civically embodied facility. But though the turbines ceased turning at this point, it was the beginning of a new life for the building in the minds of the people of Austin. When the city raised the possibility of demolishing the structure and redeveloping the site, the community objected strongly enough to stay the wrecking ball.

“Architecturally, it was built at that transition point in American architecture where power plants went very functional,” says Fred Evins, who was with the city’s office of real estate services during Seaholm’s redevelopment. “This was the end of an era of Art Deco architecture, so the city decided to retain it. This introduced the question, where do we get the money? The community’s vision was to take the historic structure and make it a public, nonprofit space, like a museum or library. The city looked at that, but what it amounted to was more money would be required than the city wanted to spend.”

In 2000, the City of Austin drew up a redevelopment master plan for the seven-acre site, and, in 2004, released an RFQ outlining a public-private partnership. The city’s infrastructure plan established a tax increment refinancing zone, remediated and stabilized the plant, moved utilities, and added roads to tie the disconnected plot into the city street grid. This reduced the developable area to five acres. Seaholm falls within a Capitol view corridor, which restricted vertical density to the northeast corner, where the tower — the prime economic engine — now sits. The city also set up a profit-sharing clause whereby, when a developer sold out their interest, if over a certain return on investment was earned, the city would recoup the money it put into the project. 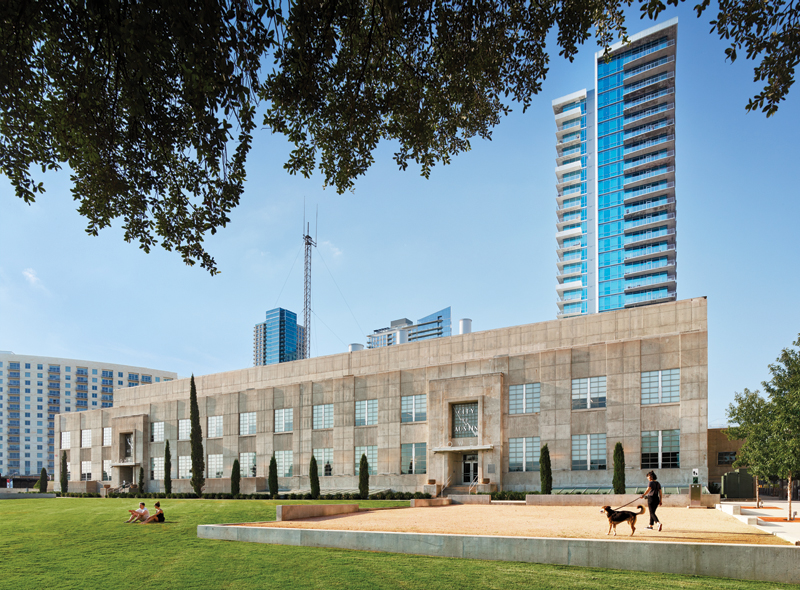 Another thing the city did was ensure that the private side would have the flexibility it needed to respond to the market while still requiring a certain amount of public space, including the plaza. The city also invested in a three-level below-grade parking garage. It divided Seaholm into three separate sites: The city kept ownership of the turbine hall but put it on a 99-year ground lease; put the tower portion up for sale; and put the low-rise component on a lease that would convert to sale once a certain performance milestone was reached. “One of the things we had to learn was you can’t control everything,” Evins says. “The private side has to be able to respond to the market.”

This turned out to be an essential ingredient in Seaholm’s success. Soon after the project was awarded to developer Southwest Strategies Group and architecture firm STG Design in 2005, the financial crisis of 2007-08 turned the market on its head. “When we started competing for Seaholm, mixed-use projects were really the hot thing,” says John Rosato, a principal at Southwest Strategies Group. “The projects that incorporated hotel, office, condo, commercial — all of that together — really were doing well. When the crisis hit, almost all of those started to fail, for various reasons. The outcome was that banks were no longer interested in funding mixed-use projects.”

The initial scheme located offices and a hotel in the tower, apartments in the low-rise structure, and retail space in the turbine hall. After the crisis, the program was rearranged: Apartments were located in the tower, retail and commercial in the low-rise structure, and a corporate headquarters — the offices of Athenahealth, designed by Charles Rose Architects — in the turbine hall. While construction was underway, Southwest, noting a pent-up demand, switched the tower apartments to condos. It turned out to be the right move. All of the tower’s 275 condos sold in 10 days, and by the time Southwest sold its interest in the project it was able to reimburse the city 100 percent of its investment. 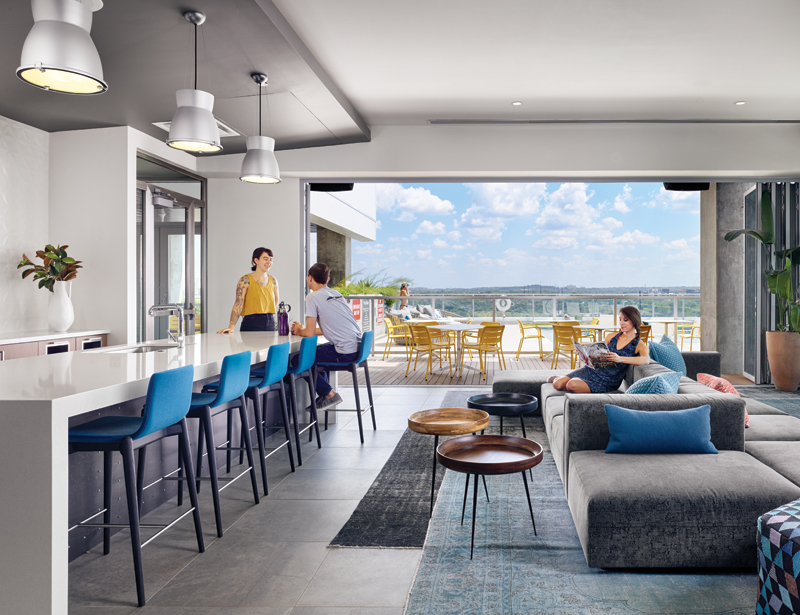 The condo tower’s amenities area and pool deck provide sweeping views to the south and west. Photo by Casey Dunn.

Architecturally, STG took cues from the language of the existing infrastructure in the design of the new buildings. The balconies on the 30-story, 615,000-sf tower respond to the patterning of the plant’s exhaust stacks. They also reused certain elements salvaged from Seaholm’s remediation and demolition, including placing old steel hatches, painted in bright colors, on the tower’s street face. The boilers on the north end of the turbine hall were selectively deconstructed, preserving the stacks and steel armature while opening this face of the building up to daylight and access. The new low-rise and high-rise buildings were pushed to the northeast and northwest corners of the site, opening up the center for a public plaza. In fact, all of the project’s pedestrian functions (residential, retail, restaurant, office) open onto this plaza, whereas the street frontages are automobile service-oriented (parking garages).

“The project is surrounded by busy, harsh streets,” says Jim Susman, FAIA, a principal at STG Design. “We created a living courtyard at the center of the site. The office/retail component buffers this space from the railroad tracks. It’s right by the tightest corner on the Missouri Pacific Railroad. Seventeen trains pass per day. There’s a big squeak when they do. We had to up the acoustical performance of the window wall on the tower as well.”

The construction of the project, overseen by general contractor Flintco, was highly complex and involved a lot of coordination. Existing utility lines had to be moved and old infrastructure reused. The plant’s water weirs beneath Seaholm’s front lawn, for example, were repurposed as rainwater collection cisterns that are now used for site irrigation.

“Having the historic Seaholm project part of the Flintco legacy is gratifying,” says Kevin Moyes, president of Flintco’s south central region. “The complexity of reconfiguring utilities on this compact, urban site, and successfully overcoming the challenges of design and construction of a large mixed-use project — surrounded by an iconic structure like Seaholm — is a remarkable accomplishment for this team, and the City of Austin.”

Excellent article – really enjoy seeing adaptive reuse of a decommissioned power plant into something new once more. It sounds like a great use of the site and surrounding views.

Great article, Aaron. Unfortunately, the client wasn’t Southwest Strategies Group, it was Seaholm Power, LLC. As usual, some of those involved in the project want folks to think they were the only ones involved in the concept, financing, and development of the Seaholm Project.. As one of the active members of the partnership that spent 12 years redeveloping the property, that should be clarified.