Real estate development in Houston throughout its history has been mostly unremarkable, the minimum product of pro formas and adherence to the city’s slipshod patchwork of building, site plan, traffic, and parking ordinances. The only notable interruption in the pattern of averages was during the go-go years of the 1970s and 1980s when, according to an April 1982 Texas Monthly profile, Houston was “(maybe) the architectural capital of the United States, the place where styles are set.” At that time, interest rates were sky-high, and certain progressive developers (Gerald Hines being the best-known example) experimented with hiring fashionable architects to add high-quality design as a means to differentiate their products in a crowded and already expensive market.

Lately, perhaps as a result of a ripple effect from Austin, whose sizzling architectural scene has been fueled by a steady supply of rich, tech-tax refugees from California, Houston now has a handful of developers pushing design. A new member of this clique is Kirby Liu, son of Frank Liu, whose real estate companies include Lovett Homes, Intown Homes, and Lovett Commercial Realty. Lovett’s townhouses and strip malls, neither ugly nor distinctive, are mostly inconspicuous despite their large numbers. In his role as director of development at Lovett Commercial, and in particular as project manager for the redevelopment of the former central Houston post office, Kirby Liu appears to be working to raise Lovett’s design standards. He studied for two years at the Harvard Graduate School of Design before he became impatient to work in the real world. He tested out working at a fancy firm, Rex, for about half a year before returning home to become involved with Lovett’s purchase of the former downtown post office, which sits on a prominent 16-acre site on the northern edge of downtown and had been mothballed in May 2015.

The central U.S. Post Office building (1962) was designed by Houston firm Wilson, Morris, Crain & Anderson. It was built on the site of the moderne Southern Pacific Railroad Station (1934), designed by Fort Worth architects Hedrick & Gottlieb, that was demolished in 1959 when the site was acquired for the post office. The complex consisted of a 530,000-sf, two-story, windowless mail-sorting facility covering six acres, fronted by a five-story slab containing a post office on the ground floor and administrative offices above. In front of the office tower is a flat terrace with a modernist checkerboard of planted and paved sections. Because the site slopes down toward Buffalo Bayou, the edge of the terrace has a tall retaining wall butting up to the street. The complex is impressive mostly for its vast spread. When the building opened, for example, newspaper accounts described in detail the electric buggies used to carry postal workers across the 880-foot-long space. Literally detached from the surrounding urban fabric by virtue of its parking lots and retaining walls, it represents the suburbanizing trend of American postwar modernism that is now considered troubling.

Lovett’s first idea for the site was to scrape the post office building and repopulate it with high-rises. While they were studying this option, they were approached by the founders of a music festival called Day for Night, who proposed using the building as a temporary venue. After two successful iterations of the festival in the winters of 2016 and 2017, Lovett became convinced that the building could be reused rather than being demolished. They then applied to have the post office listed on the National Register of Historic Places in order to be eligible for redevelopment tax incentives. Although there is a slew of them, the two largest and most commonly used incentives are the 20-percent federal income tax credit and the 25-percent Texas franchise tax credit. These can amount to several million dollars’ worth of tax breaks for a large project. (Lovett has not indicated whether it will have the post office listed as a City of Houston landmark. Were they to do so, the building could potentially be protected from demolition, and such additional incentives as a 40-percent reduction in the city’s onerous parking requirements would be available.)

Because of its prominent location, Kirby Liu pushed for the post office rehabilitation to be a showpiece. Lovett considered several well-known national and international architects for the job. They eventually selected OMA, with Jason Long out of its New York office as partner in charge. The architect of record is the Houston firm Powers Brown. The great challenge of this project was how to rework and reintegrate what is essentially a gigantic suburban complex on its own superblock plopped right next to downtown. The initial design, which appeared briefly on Swamplot in October 2017, before it was taken down at Lovett’s request, was quite aggressive (but fascinating, nonetheless), with giant gashes cut out of the mail-sorting warehouse. However, in order to maximize all the incentives that make these types of projects viable, the team revised the design to adhere more closely to the Secretary of the Interior’s standards for the treatment of historic properties. 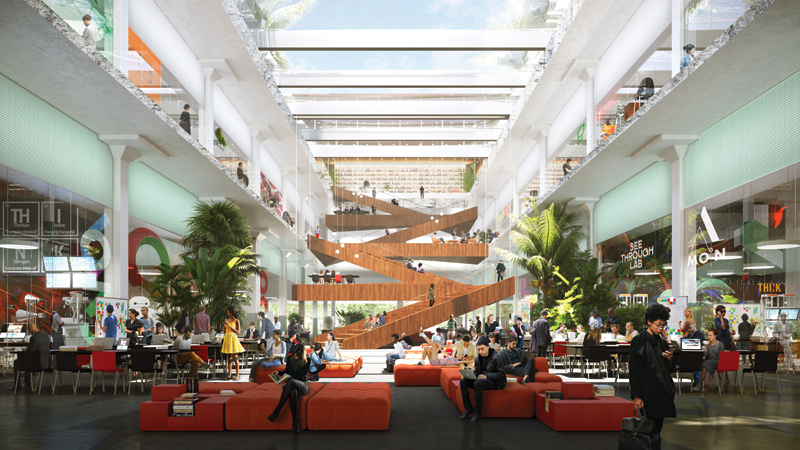 The mail-sorting hall will be broken into three skylit atriums with a central stair to allow access to the second level and roof.
IMAGES BY: Ioma

The design as publicly presented in June of this year is officially called POST Houston (abbreviated POST HTX) and is respectful of the historic fabric of the building. The mail-sorting hall is going to be broken up into three sections reflecting modern life: shopping, eating, and (co-)working. Each programmatic unit will surround a central atrium sawed out of the cast-in-place concrete structure that will daylight the spaces. In each atrium, there will be a differently designed sculptural, central stair to allow access to the second level and to the roof. On the roof, there will be a quasi-public, landscaped park, the “Skylawn,” designed by Chicago landscape architect Hoerr Schaudt, who also designed Centennial Garden in Houston’s Hermann Park. It will afford splendid views of downtown Houston’s glimmering collection of skyscrapers. The eastern end of the roof will become a farm, either for the restauranteurs down below or for a community gardening organization. The eastern third of the mail-sorting building is currently reserved for a music venue, and the office tower will become a hotel, both to be done in a later phase. The ample surface lots will suffice for now for parking, with the addition of landscaping and way-finding signage.

Although POST Houston’s mixed-use program, essentially a repeat of Gerald Hines’s 50-year-old Galleria (minus Neiman Marcus), breaks no new ground, it is impressive: Not only did Lovett save an important, and problematic, piece of Houston’s postwar architectural heritage that might more easily have been razed; they also commissioned an internationally-known architectural firm to work it all out. POST Houston is promising, especially because it comes from one of Houston’s large, established developers, which in the past has been indifferent to the historic resources on its properties. In 2015, for example, Intown Homes destroyed the moderne Shell Research Laboratory (1946) on Bellaire Boulevard, designed by Houston modernist Herbert Cowell, then working for the Austin Company, to build townhouses. Lovett, and especially Kirby Liu, should thus be commended for their ambitious break from precedent. We can only hope that Houston’s other developers take note.

Ben Koush, AIA, is an architect in Houston.