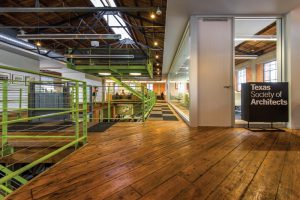 View from the reception area of the newly renovated TxA office. The twin soffits running the length of the space improve acoustical control and partially conceal an abundance of air conditioning units and ductwork while preserving the airy openness of the interior. Photo by Kevin Halliburton, AIA, ICE Imaging

The building at 500 Chicon Street in East Austin has a storied past. Erected in the 1920s as a storage warehouse for the Gulf Refining Company, it is composed of concrete, brick, full-dimension lumber, and a steel truss roof. Texaco took over ownership sometime in the 1950s or 60s, and in 1976 it was the office of the Associated Republicans of Texas.

It spent a certain number of years vacant. In the 1990s, it may or may not have played host to a gentlemen’s bath house, and a group of developers considered turning it into an incubator for fledgling tech companies, much in the mode of the co-working spaces that are all the rage today.

In 2002, graphic design consultancy fd2s scooped it up and hired Houston-based Stern and Bucek Architects to help them transform the old oil barrel shed into their office. The architects installed industrial-looking divided light windows in the brick infill walls, cut a 1,000-sf hole in the wood floor to open the basement to the daylight that spills down from the ceiling’s high clerestory, and hung a steel “bird cage” from the trusses. This loft’s Corbu-green-painted steel framing integrates with the railing around the cutout and with the stairs that lead to the lower level. They arranged semi-enclosed workspaces around the open-plan space and inserted a reception desk, enclosed in a metal and glass paneled cube rotated off the axis of the rectangular plan, into the wall by the entrance, where it protrudes out onto the porch. The bird cage was lined with Tatami mats, and fd2s imagined they would use it as a meditation perch from which to conceive their latest branding concepts.

It’s difficult to say what level of architectural education or sensitivity the people who originally built 500 Chicon had, yet each of the materials was used in a forthright manner that is very much admired by architects today. The compressive strength of brick is evidenced by its use to form the columns that support the floor’s timber girders. The lightness and long-span capabilities of structural steel are on display in the exposed roof trusses. The rugged wood plank floors and the rough, unfinished concrete of the basement’s retaining walls have over time developed a variegated patina, as though intended to exhibit the finest principles of the Japanese wabi-sabi tradition. In a culture that by and large favors the new over the old, that expends great amounts of money and energy to tear down perfectly reusable structures in favor of often inferior replacements, it is relieving to see people instead valuing what is there and adapting it to new purposes.

That same spirit fueled 500 Chicon’s most recent renovation. The Texas Society of Architects moved into the space in 2011, doing little more than cosmetic touchups to the fd2s layout. In 2015, the Society hired the Austin office of Lawrence Group to reorganize some of the workspaces, develop an acoustical dampening solution, and complete an efficiency upgrade, all while maintaining as much as possible the openness and raw materiality of the interior. The architects bolted a sunshade to the south face of the building, added a new insulated roof, and installed storm windows, all to improve thermal performance. Some of the offices and conference rooms were entirely enclosed, while others were left open, and two continuous soffits were run down the length of the space for additional acoustic control.

One interesting result of the efficiency upgrade is a greater quantity of machinery and ductwork in the office, much of which is tucked above the soffit, where it hangs from the existing wood ceiling. The effect is much like that conveyed by Rem Koolhaas’ installation in the central pavilion of the 2014 Venice Architecture Biennale, which comprised a drop ceiling and a mechanical array suspended beneath the building’s frescoed dome. There, as here, the composition reminds us that architecture exists with one foot in the past and the other on the leading edge of technology. It is the negotiation of this dichotomy that defines the profession today.

500 Chicon is an environment that really needs to be experienced to be fully appreciated. The latest work by the Lawrence Group beautifully builds on what was already there. The natural light and creative energy bouncing around the space is invigorating. It’s a perfect symbolic touchstone for our industry in Texas. Congratulations to everyone involved in its creation, and an even bigger congratulations to the TxA staff who get to charge their creative batteries on that energy every day.