The Llano Estacado is flat
And seems to go on forever
Yellow fields under the blue sky
Then without preamble
The flatness is broken
By a hundred-foot drop
The Palo Duro Canyon splits the horizon
A sheer world beneath the horizontal world
Where the reality of time
Hundreds of millions of years
Can be read in the colorful earth
Of the cliff walls
Courtesy the meeting of the Caprock
And the Prairie Dog Town Fork
Of the Red River. 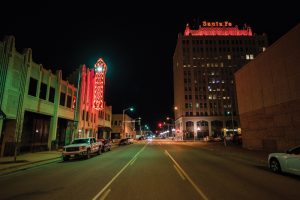 Downtown Amarillo is home to an impressive collection of beautiful Deco buildings that appear to be lightly occupied. At night, hardly a soul can be seen walking the streets. Photo by Alan R Photography.

It brought nothing so much to mind
As the work of D U S T
Which we heard about the day before
The strata of the rock a living likeness
Of the rammed-earth walls
Formed by Jesús Edmundo Robles Jr.
And Cade Manning Hayes.
They showed us two houses
They had designed and built
With their own hands and a group of guys,
From the foundation to the door handle
In the Sonoran Desert near Tucson
For clients with dollars and ideals
Of retreating into nature
And pursuing culture.
This work of great beauty and simplicity
In tune with the local landscape and the sun
The reality of time legible
In the close attention to detail
At every step of the way
Gave the assembled architects pause
And awe
Only to be broken by a nervous joke:
“How much money do you think they made on those houses?”

Not a whole hell of a lot
Which mattered little to the Palo Duro
Whose rustic cabins and hiking trails
Were laid during the Great Depression
By the men of the Civilian Conservation Corps
Who earned a dollar a day
Their true compensation
We might believe
The satisfaction of a hard day’s work under the sun
And the money sent home to mama.

Gathered there in the morning
In the Mack Dick Group Pavilion
Designed by Clayton&Little
To be rustic but modern
With big windows to see the forces of nature
We heard from another force of nature
Dan Rockhill of Lawrence, Kansas
Whose practice, Rockhill and Associates,
Finds inspiration in the industrial infrastructure
And machinery of Agribusiness
Repurposing these materials for new buildings
Making the most of a less-is-more approach
To care for the land as we trespass upon it
And to combat the “Fisher-Price Disconnect”
This product of our fast, cheap, out-of-control culture
That wants the mansions of the robber barons
But settles for plastic castles.
Take it easy! Slow down! Look around you!
Work with what you have
Beauty can be the result
And the beauty of Rockhill and Associates
Is that of a leopard: lots of spots
Enough to make it interesting, human
The force of nature runs Studio 804
Where he takes a group of architecture students
On a journey to design and build
A house in one year
Spiky haired and pimply cheeked
Though they may be
Young souls in need of whipping into shape
“Students offer opportunities to do things not easily achievable otherwise.”

Andrew Freear of Rural Studio
Whose pacific presence followed the Rockhill tempest
Spoke of the poetry of social engagement
This program of Auburn University
The legacy of Samuel “Sambo” Mockbee
That spreads goodwill in the Black Belt country
Around Newbern, Alabama.
Freear showed us the houses
That he and his students designed and built
For poor families
The community centers and fire stations
For dying towns in dire need
The smiling faces of those who had benefited
And he spoke with humble resignation
Of the small impact these small projects have
In the face of a culture and history
That has given us cars that can only be
Fixed with a computer science degree
And even in the midst of farm country
We drive a hundred miles to buy our food from Piggly Wiggly
He tells his students:
“Don’t think you’re going to be the Pied Piper leading the people to a Brave New World. It’s not about changing things. It’s about understanding them.” 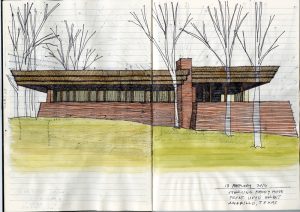 This sketch by Michael Malone, AIA, depicts the Sterling Kinney House, designed by Frank Lloyd Wright and completed after his death in 1960. The Usonian design was recently restored and appeared in the July/August 2009 issue of TA.

This we understood
As we boarded the tour buses
Gorged on a hundred projects
And a barbecue lunch:
That designing and building architecture
Can offer an alternative to the Fisher-Price Disconnect
A conduit to the truth of materials
And the righteousness of good tectonics
The satisfaction of a hard day’s work under the sun
And the money sent home to mama

The buses lumbered out of the canyon
Back atop the flatness
For the drive to the Sterling Kinney House
By Frank Lloyd Wright.
We hit evening rush hour traffic
On the western outskirts of Amarillo
Where the city once petered out onto the Plains.
Now it ends with an exclamation point of new development
McMansions, subdivisions, hulking apartment blocks
Big box retail and fast food chains
Megaplexes with parking lots packed
With monster trucks
It all having risen in the last few years
The dirt still freshly turned in the ditches
The great gas flare of the tight oil boom
Destined to burn out as it was lighted
A vituperative statement in built form
Sneering at downtown Amarillo
Whose stock of Deco buildings is lightly occupied
Where hardly a soul can be seen
Walking the neon-lit streets after dark.

That night we dined at Big Texan
“Home of the Free 72-oz. Steak”
As the towers of beer arrived
And later the seared cuts of meat
Before wisdom took back seat to appetite
There was a moment’s reflection
D U S T had told us that architecture and food
are always related
Freear had driven that home:
“Why do we expect food to be cheap? It’s the most important thing. It keeps us alive.”

I was only half done with my steak
When I could eat no more
And I didn’t meet the waiter’s eyes
When I told him to take it away.