Apropos of this issue’s feature and portfolio sections on houses and restoration I thought I’d write about the house where I live, which was recently restored. It and many of its kind in the North Loop neighborhood were built in the late 1940s as affordable housing for soldiers returning from World War II and going to school on the G.I. Bill. It is 800 sf on one story with two bedrooms, one bathroom, a kitchen, and a living room. It’s basically a rectangle in plan, except that the rear bedroom extrudes from the volume, creating a nice corner window condition where I keep my desk. It’s a no-frills construction done as cheaply as possible. The builders started by sinking cedar piers into the ground, some as little as six inches deep. They framed the floor joists atop the piers and nailed the oak floor directly to the frame. The floor was covered in tar paper to protect the finish, and then the walls and roof were erected. Once the house was enclosed, the tar paper was ripped up, exposing the floor, and it was pretty much done. 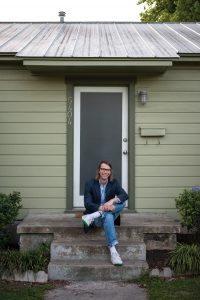 Fast and cheap, yes, but the materials they used were superb: The old-growth pine framing the walls is hard as nails; the oak floor is still solid after 70 years; and the roof’s clapboard is still straight and sturdy. The wood siding, however, had suffered during its time under the Texas sun, so the owner decided to replace it and the windows, an exciting process I got to witness first-hand. The old siding came off, exposing the framing and the interior wall. There was no insulation or weather barrier. Still, the framing was in good shape with hardly any water damage. Up went insulation, OSB, weather barrier, and new fiber-cement siding, in roughly the same green color. The new vinyl windows are equipped with low-e, argon-filled IGUs. In short, this old drafty house, designed to vent heat quickly at night, is now an igloo that should make my air conditioning bills much more reasonable this summer.

It may have been affordable housing at the extreme northern verge of Austin when it was built, but it isn’t now! Today, the neighborhood is central, located just five miles north of downtown, and houses of this vintage are going for $350,000 and more. Many new buyers are knocking them down and building much larger homes on the lots. Others are keeping them and adding on. Still others are building “granny flats” or “garage-mahals” in the rear of the lots to generate a little rental income. The house I live in is one of only a handful it seems that still occupy the original footprint. Where once it was a cookie-cutter emblem of postwar expansionism, it is now a quirky holdover from the past in a fast-changing district, an amalgam of old and new that serves its original function admirably while achieving today’s thermal performance standards. I simply love it.