In January, Chilean architect Alejandro Aravena was awarded the 2016 Pritzker Prize. Quite a lot has been written about the man since then, and thank goodness: Before he won his profession’s highest honor he was very little known in this country. Few of those writing about him, however, have seen his work, as he’s mostly built in Chile. But he does have one completed project in the U.S., and it just so happens to be in Texas: a dormitory complex at St. Edward’s University in Austin, which was completed in 2008. I toured the building in February with Phil Reed, FAIA, of Cotera+Reed Architects, the local on the project, and Adam Pyrek, a University of Texas at Austin architecture professor who was Cotera+Reed’s project manager for the dormitory. 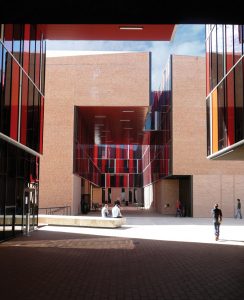 A dormitory complex at St. Edward’s University in Austin is the 2016 Pritzker-winner’s sole built U.S. project. Photo by Cristobal Palma.

“He’s a prince,” said Reed in response to my question about what it was like to work with the Pritzker winner. Indeed, Aravena is a striking figure and a charismatic speaker, as anyone can see from watching his TED talk on how design can answer problems of mass urbanization, CO2 emissions, and natural disaster. He used this cogent charm to win the St. Edwards commission. Apparently, Aravena was the only architect to show up to the interview process without a team in place or even the outlines of a proposal, and nonetheless the university administration decided he was the man for the job.

The building itself is beautiful in just about all the ways architecture can be beautiful: functionally, formally, materially — but its current configuration is not the design Aravena originally proposed. In his first scheme, the structure was completely raised on pilotis, leaving the ground plane open, and it snaked around on itself — sort of a meandering Unité d’habitation. The design didn’t win any hearts at St. Edwards, which has a general look of red, sloped roofs and beige brick that it likes to reinforce. Aravena proved flexible enough to play along, without sacrificing his sensibilities.

The complex comprises three volumes, two of which are connected via a sky bridge, surrounding a paved courtyard where there are café tables. All of the public functions are grouped around this core — energizing the community with open views to what is happening across the way — while the dorm rooms face out to the surrounding campus. It has been compared to a geode, and it’s hard to think of a better description considering the rough brick outer walls and red glass-clad courtyard. Indoors, the reinforced concrete structure is left exposed as much as possible and the minimal lighting is indirect, washing the architectural surfaces rather than the eyes of the students.

The one criticism I’ve heard about the dormitory is that it’s dark, in the courtyard and inside. But that’s not a criticism at all. In summer, when it’s 106 degrees outside and the sun is peeling the paint off the hood of your car, a little darkness is a welcome respite. Aravena’s building is also a respite from the mindless, cost-cutter crap that constitutes most housing being built in Austin today — student or no — and a superb example of how exciting good architecture can be.