Thomas Colbert joined the faculty of the Gerald D. Hines College of Architecture in 1985 as an assistant professor after being snatched away from a five-year stint at Texas A&M. He quickly established himself as a popular and effective studio critic who brought the right combination of intelligent rigor and empathy to his teaching. He helped students navigate their way into the profession and find jobs, and many of them remained in contact with him for years after they graduated. Tom died of cancer August 21, 2015. 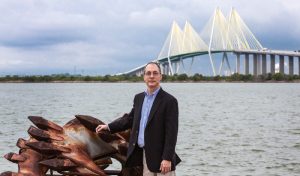 During the latter portion of his career, Colbert focused his efforts on coastal planning for storms and flooding. He is pictured here in front of the Fred Hartman Bridge, which spans the Houston Ship Channel. Photo by Craig Hartley.

UH was the right place for Tom. He moved into a variety of critical leadership positions – coordinating the third year program, then the fifth year; serving as an assistant to the dean at a time when coordinators maintained continuity at the loosely organized college. Tom went on to become the Director of Graduate Studies and continued to help shape the young program. In 2014, AIA Houston recognized his contributions to teaching with an Educator of the Year award.

Tom had many interests and could engage a conversation on just about anything. He loved anecdotes but had the sharp, critical mind of one trained at Princeton and Cambridge. And he was raised in a rich architectural milieu: His father, a noted architect and iconoclastic dean of the architecture school at Columbia, was a strong promoter of modern architecture in southern Louisiana. Tom developed a vivid knowledge of architecture and urbanism. Discussions and arguments were his methods of coordinating the graduate program.

Tom instigated forward-thinking endeavors to bring new opportunities to the college. He nurtured a relationship with the French Consulate and several French architecture schools and created an active exchange program that ran for several years with Tom handling all the details, personal counseling, and bureaucratic complexities. Tom was fearless. He later replicated this feat in an even more complicated exchange with an architecture school in Moscow.

Tom’s French Consulate connection led to an exhibition he put together with students that was shown in Paris. An extraordinary reciprocal event brought an exhibition of one of French President François Mitterrand’s Grands Projects to Houston. It was installed in the at-the-time-unoccupied, Philip Johnson-designed University of Houston Architecture Building. President Mitterrand attended the opening, and for several years afterward, leading French architects visited the school to give lectures.

At one point, Tom decided to document conditions in the Texas State Penitentiary in Huntsville. His withering persistence gained him entrance and, with a photographer, he put together an exhibit and symposium on prison life.

Tom focused much of his recent efforts on coastal planning for storms and flooding. As a New Orleans native, he was deeply affected by Hurricane Katrina’s devastation in 2005. (The 1953 family home designed by his father in Metairie was among the losses.) Tom encouraged his students to map portions of the coastline and used analytical mapping as a basis for speculative disaster planning. He taught the students to look at engineering solutions as architects and urban designers — opportunities not only for solving problems but also for enhancing the public environment.

This work tackled problems for settlements and large refineries that hug the ship channel. Maps of potential urban inundation of Houston displayed frightening scenarios that Tom featured in special issues of Cite as its sometime editor. He organized symposia and worked collaboratively with planners in other coastal cities in Louisiana, Delft, and Buenos Aires, and with Rice’s SSPEED Center (Severe Storm Prediction, Education, and Evacuation from Disasters). Additionally, he teamed with planners and engineers at Texas A&M and the UH College of Engineering, and served as chair of the AIA, Houston, Urban Design Committee.

Tom’s research served as a foundation for a visionary project, “Risky Habit[at]: Dynamic Living on the Buffalo Bayou.” Created by his students, UH professor Peter Zweig, and visiting critic Michael Rotundi, Risky Habit[at] was part of UH-led Three Continents Studio and exhibited with accolades at the International Architecture Exhibition at the Venice Biennale in 2014.

One of Tom’s best-kept secrets was his artistic talent. An inveterate doodler, he occupied his subconscious during meetings making intricate line drawings, signature tangles of thread. Meanwhile, in his studio, larger, more sophisticated versions of the mysterious ink-line weavings were taking shape. In the last year of his life, the drawings were made public in an acclaimed exhibit at Architecture Center Houston.

Tom kept the worst aspects of his painful ordeal with cancer mostly to himself. During the difficult months after his diagnoses, he continued to teach, write, make drawings, and contribute to collaborations on flood and storm protection on the Gulf Coast. In the end, he was still showing the courage and desire that characterized his life.

Bruce Webb is professor emeritus and former dean at the University of Houston Gerald D. Hines College of Architecture.