In celebration of Gerald D. Hines’ 90th birthday, an unprecedented gathering of architects and one architectural critic convened onstage at the Hobby Center on Sept. 18 in Houston. Cesar Pelli, Robert A.M. Stern, Henry Cobb, Jon Pickard, Eugene Kohn, Art Gensler, and John Burgee — the late Philip Johnson’s partner — sat in armchairs flanking Hines, who was seated at center stage, as a video montage played snippets from the panelists as well as from notable absentees Frank Gehry, Jean Nouvel, and David Childs of SOM. 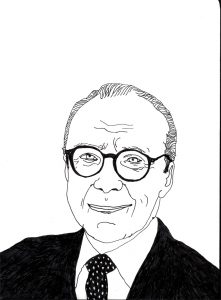 Patricia Belton Oliver, Dean of the Gerald D. Hines College of Architecture at the University of Houston, opened the forum by paraphrasing Gehry’s gaffe: “’Ninety-eight percent of everything that is built and designed today is’ — leave a blank,” she quipped. “‘There’s no sense of design, no respect for humanity or for anything else.’ But,” Oliver pivoted, “a group of people are doing something special,” – a group that has the ability to navigate the quantifiable as well as the immeasurable, she said.

Pulitzer Prize-winning architecture critic Paul Goldberger moderated the evening’s discussion. Goldberger first wrote about Hines in 1976 in the New York Times, his “kindergarten special project.” The article examined the relationship between architects and real estate developers, which rarely included admiration for each other, and financial goals that seldom left room for the aspirations of the architects. He described Hines as a different kind of developer whose intense discipline and enthusiasm led him to seek out great architecture as part of his business equation.

“He changed the nature of commercial development,” Goldberger said. “He didn’t want this forum to be about him. He wanted to honor the key people who contribute to a better built environment.”

Cobb spoke about Hines’ ability to build a successful firm. “Houston is the base from which this was built,” he said. “One of the most extraordinary achievements is how he has built an organization of people who have established the Hines standard, the Hines ethic, in cities across the world. You will always find Hines has been an impact and it does not come from quantity. But somehow the Hines project in any city has established a standard of architectural excellence, and, in many cases, urban design excellence. It’s not about buildings, but how you create a group of people in many places around the world who bring to urban development a standard of quality.”

Burgee shared recollections about the fun he had collaborating with Hines and Johnson. “Our best work was for Hines,” he said. “I had to sell Philip Johnson on working with Hines. The first time we met in Houston, he came in all sweaty in a jogging suit at IHOP. He was eating bacon.”

Stern recalled stories that Johnson shared about an excited Hines who would make calls feeding nickels into an airport telephone. He expressed his admiration for how Hines eventually broke into and planted his stake in the New York real estate realm. “His curiosity is fantastic. He had a hell of a time to crack that scene,” Stern said. “That is brave, Gerry, developing a building in Manhattan; totally a new game. I commend Gerry.”

The panelists also addressed how the process of creating architecture has changed with technology; how sustainable movements have had an impact; and how the changing faces of the leaders of the field now include women and minorities as well as a host of consultants, contractors, and engineering partners for a team approach versus that of a solo practitioner. “The practice as a whole is more complicated,” Gensler said, adding that he couldn’t do anything without the “enormous talent” of those around him.

Pelli (who confessed that his hearing aids allowed him to catch only part of what his colleagues had said, at which point Stern interjected: “You have not missed a thing!”) had heard of Hines and thought, “Wow. What a guy. I wish I could work for him. He has similar aspirations to mine but on the client’s side.”

Gensler posited that the future of buildings is being driven by the interiors more than the exteriors. Stern rebutted, saying, “If you don’t like the suit, you are not going to like the underwear.”

Hines’ closing remarks included a nod to “these wonderful architects with great imaginations for the problems we have thrown at them. To build better cities, we have to have these architects. I thank each of them. Thank you.”

Florence Tang, Assoc. AIA, is a design professional and journalist based in Houston.