Houston architect and landscape architect Charles Tapley, FAIA, died September 21, 2015. He was 84. Tapley practiced in Houston from 1960 until he retired in 2011. In the 1970s and ’80s, the buildings his office designed frequently received design awards and were widely published. Even so, Tapley came to value his work with Houston’s natural settings as his most enduring contribution.

Born in New Orleans, Tapley grew up in Houston, graduating from the Rice Institute with a Bachelor of Architecture in 1955. He worked for Houston architects George Pierce-Abel B. Pierce and Hamilton Brown and landscape architect Fred Buxton before commencing practice in 1960 with Charles H. Pagan. Beginning with the Johnston House (1964), Tapley designed a series of houses constructed around light-filled spaces in intimate contact with nature. These included a magical house for Grace David, Larry McMurtry’s inspiration for Aurora Greenway in “Terms of Endearment” (1971), and a forested suburban refuge for photographer Gay Block (1972). 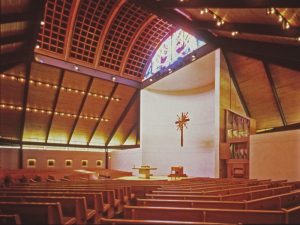 St. Cecelia Catholic Church in Houston (1978) was the first in a long series of houses of worship that Tapley designed. Photo by Richard Payne, FAIA.

Between the mid 1960s and ’70s, Tapley worked for developers on such projects as the Post Oak Park Townhouses (1966); a trail system, community swimming pool, and sales pavilion for the first neighborhood in the Friendswood Development Co.’s Kingwood community (1971); the Esso Eastern of New Jersey office complex (1970) in Woodlake (Friendswood’s 250-acre mixed-used tract in West Houston for which Tapley was master planner); and the Woodlake Recreation Center (1972). The recession sparked by the Arab Oil Embargo of 1973 brought such work to a halt.

Tapley then set off on a different course, gravitating to projects involving public space and places of worship. In 1971, he embarked on a Bicentennial project focused on Buffalo Bayou that turned into a career-long mission to preserve and enhance Houston’s prodigious yet fragile natural assets. Conservation, sustainability, and the value of designing for native plants, climate, and wildlife were integral to Tapley’s environmental ethos, leading Chicago critic Nory Miller to hail him as a “landscape activist” in 1977. Camp Allen, near Navasota, which Tapley designed for the Episcopal Diocese of Texas (1975); Lake Livingston State Park near Livingston (1977); and Live Oak Point in Fulton, designed for HEB (1981) are landscape-intensive projects where designing buildings in relationship to natural systems was critical.

In 2000, Tapley was profiled by David Theis in “Cite: The Architecture and Design Review of Houston.” Theis noted that, after Tapley’s wife died in 1988, Tapley began to downsize his practice to concentrate on projects that he could pursue hands-on. This included transforming a Montrose bungalow into a live-work space and garden, where, Tapley told Theis, he could wish his trees good night every evening. One project that was especially meaningful was maintaining the walkways and slopes where White Oak Bayou empties into Buffalo Bayou downtown. Tapley arranged to work, first with county probationers and then with state prisoners, on planting the bayou banks with native trees because he saw this as a way to give new purpose to the incarcerated. Tapley also devoted himself to installing and maintaining the Lynn R. Lowery Arboretum at Rice University (2001) to restore biodiversity to Rice’s campus. He collaborated with Chula Ross Sánchez on the installation of a green roof at the Burdette Keeland, Jr. Design Exploration Center at the University of Houston’s Gerald D. Hines College of Architecture (2007).

From the 1970s through the 2000s, Tapley taught at the architecture schools of the University of Houston and Rice. This enabled him to interact with students and spot talent. Tapley gave architectural interns exceptional professional opportunities, and he was revered by several generations of architects who worked for, but more often collaborated with, him. As evidence of the esteem in which he was held, Tapley received the Thomas Jefferson Award of the AIA Houston Chapter in 2003, when his career was the subject of an exhibition organized by Gerald Moorhead. In 2011, he received the AIA Houston Lifetime Achievement Award and in 2012 the Texas Society of Architects’ Llewellyn W. Pitts Lifetime Achievement Award. The Tapley Tributary in Buffalo Bayou Park is named for him.

Charles Tapley was charismatic, enigmatic, and elusive. Like the Pied Piper, he sought to lure the uncertain and indifferent with whimsy, charm, and gentle persuasion. Chula Sánchez caught this aspect of his personality when she observed: “Charles was like a firefly, hard to catch and hold. He never liked being captured.”