The title of the art historian Sigfried Giedion’s best-selling work, “Space, Time and Architecture,” effects a certain gravity, even inevitability, as if it had soared in from the cosmos and onto your coffee table. Like a garbled transmission out of the ages, it speaks a durable truth, encapsulating all life’s constants in a neat triad. It is also more than a little pompous, suggestive of something less than truth and more like idiosyncrasy.

Mostly, it is memorable — the book remains in print nearly 80 years after it was first published, and its success owes more than a little to its evocative moniker. So it is surprising that Giedion, the peerless (and incorrigibly biased) chronicler of the Modern movement in architecture, nearly settled on a different, underwhelming phrase. Writing to his close friend, the émigré photographer and pedagogue László Moholy-Nagy, he proposed “Architecture as a Signpost,” explaining that “this title will be good, because in this country architecture is not generally enough grasped as a spiritual force.” (In the end he thought otherwise, at the eleventh hour pinching the British metaphysicist Samuel Alexander’s 1920 tome “Space, Time and Deity” for his own saga.)

As Reto Geiser’s biography “Giedion and America” divulges, the country in question is the United States. Unlike the rest of the émigré generation, Giedion, a Swiss native, did not make a professional break with Europe, but like his resettled colleagues, he saw in America an antidote to provincial and nativistic feeling that marred the old continent. His experiences on American soil over three decades spanning world war and cold war decisively shaped his intellectual thought.

Giedion personally found American architects to be overly technical and business-minded in their affairs. Still, he never neglected the concerns of his intended audience — the “hurried” and “moderate” readers within the fields of architecture and the visual arts — and explicated his argument through a cunning combination of image and text that went down easy. A Buchkonstrukteur (“book engineer”) in the mold of Moholy-Nagy, he agonized over layout and captions as he did body text. Geiser, an associate professor at Rice University in Houston, ably demonstrates how his protagonist simply “could not write without visual material.”

From the pages of this assiduously researched and beautifully designed volume, the historian finally emerges out from under the shadow of “Space, Time and Architecture.” Giedion, who was born in 1888, actually trained as a mechanical engineer before migrating into art history, obtaining his doctorate under Heinrich Wölfflin. His profound encounter with modern architecture at the famed 1923 Bauhaus exhibition impelled him to put off his postdoctoral thesis, a prerequisite for teaching at any European university. He never completed it, a decision that would hamper his academic ambitions later in life.

Instead he pursued criticism, encouraged in his efforts by no less than Le Corbusier, who was a lifelong confidante; the Franco-Swiss architect was a pivotal figure in Giedion’s first great survey, 1928’s “Bauen in Frankreich, Eisen, Eisenbeton” (Building in France, Building in Iron, Building in Ferroconcrete). Brimming with erudition, the monograph tied the emergence of modern architecture to the innovations in steel and glass of the 19th century, for example, positing direct connections (helpfully — that is, graphically — with arrows) between crystal palaces and the limpid curtain wall of Walter Gropius’s Bauhaus building in Dessau. Gropius, a sage pragmatist, was a reservoir of support and career advice for Giedion, beginning in Germany, but especially in America after he assumed the chair of the Harvard Graduate School of Design in 1937. It was largely due to the appeals of the former Bauhaus director that Harvard bestowed a temporary teaching appointment on Giedion in 1938, marking the start of the latter’s American journey.

The series of lectures Giedion delivered in the course of his Harvard professorship tapped into an ambitious sociological inquiry into “the origins of everyday life” he had initiated earlier in the decade. If in the 1920s Giedion’s work served a propagandistic function for the cause of modern architecture, by the 1930s his interests had shifted to the history of technology and the (by)products of industrialized machinery. While this study informed aspects of “Space, Time and Architecture,” it provided the thrust of Giedion’s subsequent book, “Mechanization Takes Command,” which elevated banal domestic artifacts — the Yale lock, patent furniture — into the discourse of art history. Little escaped his notice, not even Wonder Bread. 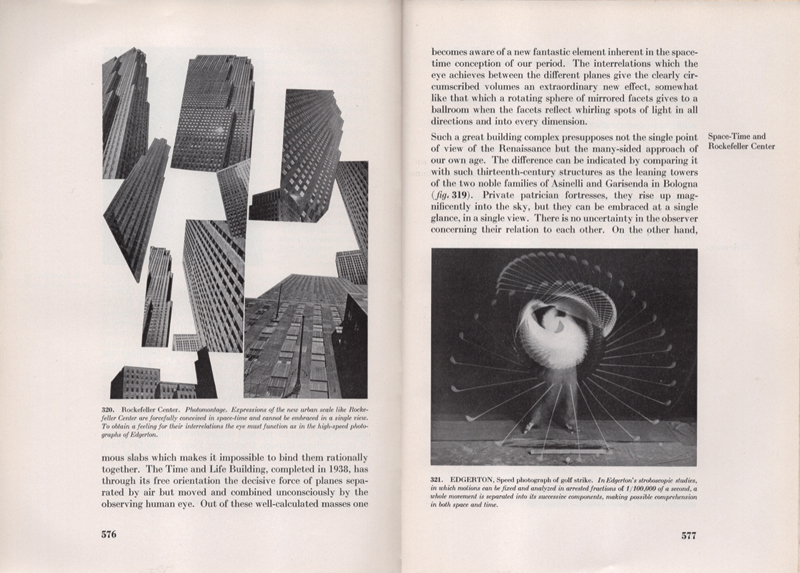 Yet the image of Giedion as impresario persists. Accusations of boosterism stalked him from the very beginning. Rather than recoil from them, he maintained the inescapable subjectivity of the historiographer. The opening sentence on page one of “Bauen in Frankreich” announces, “Even the historian stands within, not above, time. He has lost the pedestal of eternity.” But eternity was not entirely off the agenda. Until his death in 1968 — on the same day that he filed the manuscript for what would become his last book, “Architecture and the Phenomena of Transition” — Giedion gradually expanded the bounds of his inquiry, extending his reach in time as far back, in fact, as the Paleolithic Era. By setting his starting point in the present and buttressing his arguments with precedents ploughed from the past, Giedion came to regard history as a “dynamic” and resolutely not “static” process.

Allegations of eccentricity also dogged the art historian. In many cases, petty jealousy on the part of the injured egos Giedion excluded from his works lay behind these dismissals. The German architect Hugo Häring stated his feelings nakedly, fuming in a letter to Hans Scharoun about how “Giedion is a Jew, a propaganda man, completely without conscience.” Nor were Americans immune to this Old World bigotry. Philip Johnson, an enthusiastic fascist in his 30s, assessed Giedion in crude instrumental terms, judging him to be “more important for his contacts than for himself.” 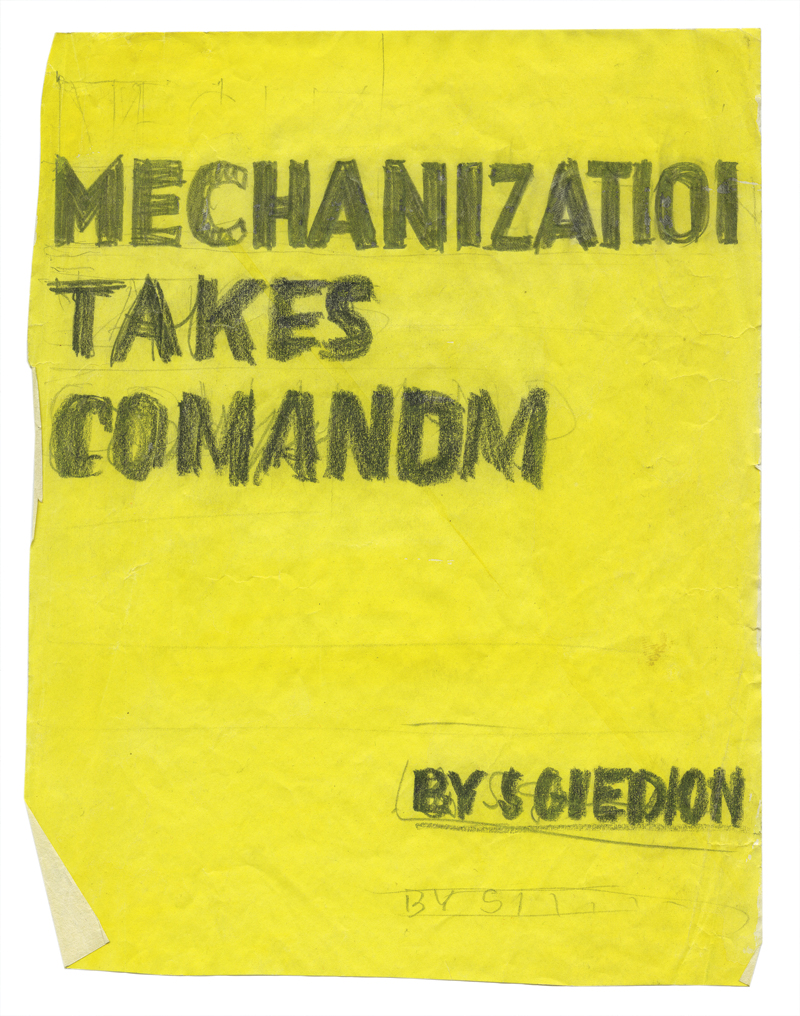 Geiser’s text and copious footnotes enliven Giedion’s cultural demimonde but also enrich it. Throughout his working life, the historian corresponded with all the heavy hitters of modern architecture, and in his position as secretary-general of the Congrès Internationaux d’Architecture Moderne (CIAM) from the group’s founding in 1928 to its dissolution in 1959, he exerted considerable sway over its development and influence. But Geiser also reveals his friendly rivalries with such luminaries as Lewis Mumford, America’s greatest public intellectual of the period, and the younger Marshall McLuhan, who was not yet the hepcat media theorist when he first met Giedion in 1939 at a pitstop on the latter’s Midwestern book tour for “Space, Time and Architecture.” Mumford was a decisive, if indirect, influence on CIAM’s overtures toward humanistic planning in the 1950s. McLuhan, for his part, eventually achieved what Giedion could not, establishing visual cultural studies as a unifying force capable of breaching disciplinary firewalls.

Giedion’s fruitless efforts to found an independent Institute for Contemporary History, and later, to conform the program of Harvard’s inchoate visual arts center to his own methods, can be put down to his tragically maladroit personality. At every major junction of Geiser’s book, which is divided into four stand-alone essays, Giedion burns bridges, overreaches, and bites the hands that sustained him throughout his prolonged stay in America. Geiser pays special attention to Giedion’s overlooked collaborator Jaqueline Tyrwhitt, who, along with her other duties as his deputy within CIAM, selflessly shepherded the historian’s texts into workable prose.

Curiously, Giedion published all his major works following “Bauen in Frankreich” in English, with the German editions only appearing much later in the century. This telling detail aids Geiser’s argument that Giedion intentionally situated himself between two lands — one old, the other new — and cultures — one confident and young, the other obliterated by war. This “in-between” condition took its toll. In his notes, Giedion often segues from German into English, within the same sentence. Like his readers, he sometimes loses the plot. But that is one of the joys of his books.