‘‘It’s all basically Mexico now, from San Antonio on down,” said the taxi driver who took me to the Austin airport. He said it with enough neutrality that it did not come off as a racist diatribe, but with inflection that made it clear that South Texas no longer belonged to us — white Americans, presumably — but to them, the Mexicans. And there it was: proof that, even without a border wall, we stand divided. “I wish I was going to Brownsville,” he continued, ruefully. “There’s a fella there I can go fishing with.” 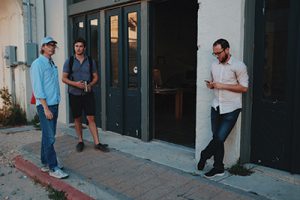 Of course, South Texas, even right up to the Rio Grande, is not Mexico. It’s not quite the U.S. either. It’s both; or, rather, it’s its own thing — a blend of cultures that appears at once familiar and strange to those of us who live more distinctly on either side of the line. The sense of the place is perhaps best conveyed in verse:

on the market walls

across the little square

so blue so green

I was going to Brownsville to make the next TxA film, this one about the efforts of bcWORKSHOP to design affordable but dignified and resilient housing for the people of the Rio Grande Valley, many of them former residents of colonias, those informal afterthoughts of avaricious landlords over hapless agricultural laborers: encampments without such basics as roads, sewage systems, potable water, electricity —

The architects at bc, working in collaboration with Community Development Corporation of Brownsville, actually meet with future residents of the properties they design, ask them what it is they want out of their homes, and listen to their needs, their concerns, their desires — just as architects do for rich people commissioning custom homes — never mind that construction costs only add up to around $85 per square foot. Just as important, bc undertakes significant site work, employing rain gardens, bioswales, and other landscape features to mitigate flooding — a perennial issue in the Valley, which isn’t a valley at all, but a table-top-flat river delta. The term “valley” was inappropriately applied by, again, avaricious real estate speculators, who sought to attract investment with lies — a crime, even in this country.

Crime — isn’t that what the border wall is all about? Stopping crime? The crime of illegal immigration. The crime of drug smuggling, human trafficking. Well, no wall will stop any of that. As Ronald Rael points out repeatedly in his book “Borderwall as Architecture,” not even the Department of Homeland Security believes a wall, no matter how murderous, will prevent the crimes it is being constructed to curtail. They see it as a speed bump that will slow illicit crossings down just enough to increase apprehension by border patrol. With projected construction costs as high as $70 billion and annual maintenance at around $150 million (according to a report released by Senate Democrats), that’s one pricey speed bump. How many affordable houses could bcWORKSHOP build with that kind of money?

“Volver, Volver,” sings Vicente Fernández in his aching canción about love lost and the desire to return to it once more. But he knows that returning would be torture, that just wanting to return is painful. Looking at the situation on the U.S.–Mexico border invokes a desire to return, as well: to go back to a simpler time when things were not so contentious. But looking back is torture — there’s nowhere to go back to. The borderlands have been fraught with conflict since humans have inhabited them: Americans vs. Mexicans, Texans vs. Mexicans, Spanish vs. Comanche, Comanche vs. Apache —

What’s needed is Avanzar, Avanzar — to go forward, through the border wall, which, after all, will begin to crumble as soon as it is erected, undermined by smugglers, hacked away at by separated lovers, worn away by the weather — the way the body dissolves a foreign object lodged under the skin.

The way forward can be seen in the smiles of the people of the Rio Grande Valley; in their readiness to laugh in spite of circumstances; their eagerness to share a drink and tell stories, not about walls, but about being alive.