For now, the lots at the corner of Burlew and Scurry streets are relatively empty as well. In some places, they’re even prairie-like. But development signs stipple the landscape, some of which has been newly graded, signaling that change is on the way. The first project of this coming change is, in fact, already there: Ascend — a complex of five townhouses developed by Lardner Group Development that wraps the street corner. More will follow as part of a second phase.

Ascend is markedly different from the majority of contemporary projects of the same typology. Both the developer and the architect — FAR + DANG — recognized the project needed to define something greater than saleable square feet, given its place on the corner and potential as an urban catalyst. “We were inspired by the corner lot and the somewhat complex planned development regulations that the property was in,” says FAR + DANG partner Bang Dang. “The strategy was to position the units in a way that would differentiate this development from the typical townhouses that are attached in a row with the same unit plans. By doing three attached and staggered units and then two detached units, this not only resulted in some interesting residual outdoor spaces, but also encouraged the units to have variations in the plan.” 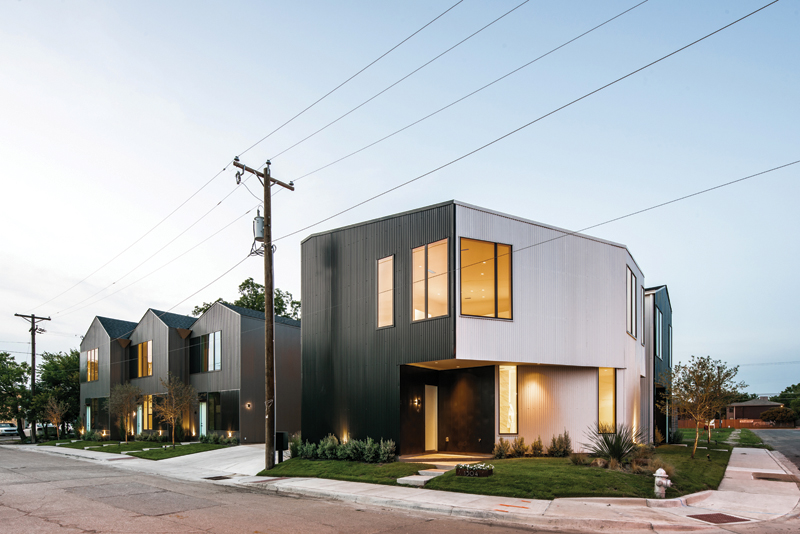 The main entrance of each of the five units opens onto the street, with garage and services located at the rear. The staggering of the units creates a variegated urban wall on the sidewalk and allows the architecture to conceal unsightly details, such as downspouts and scuppers. The staggering also made room for opening up a series of outdoor spaces behind and around the buildings. The architects added further dynamism to the development by varying the widths of the units’ footprints and the height and pitch of their gable roofs. “The idea of giving the roofs all a different form and height, in addition to the varying lengths and widths of the unit floor plates — when all combined into one development — started to formally and spatially create a very small ‘village,’ of sorts, rather than a row house-type situation,” Dang says.

Beyond the complexity in planning, the architecture is refreshingly simple, more so than in any nearby counterpart. The thin-seamed aluminum exterior, finished in white, dark gray, and black, gives the bold forms a starker appearance as well as a degree of durability. “The project is still in a somewhat transitional neighborhood that carries a sense of ruggedness to it,” Dang says. “We felt the ribbed metal siding and the colors worked well in that setting.”

The buildings’ openings play a critical role in the design. Windows were placed as extensions of interior space, in line with the circulation. This configuration leads to a patchworked exterior that tells a bit of the story of the units within, and directs views from the inside toward desirable assets in the surrounding neighborhood. The architects avoided standardizing the openings in order to improve the residents’ experience.

Inside the two-story units, which are 1,500 sf on average, the simplicity of the exterior is carried through. They are relatively barren of detail, in a positive way. They provide a blank slate upon which the owner can customize his or her setting. Daylight and views give the units their unique sense of interest, as do the vaulted ceilings, whose peaks often rise from the area of most anticipated use. As on the exterior, unsightly elements are concealed — from doorways to switches and thermostats, all are tucked away from direct view. 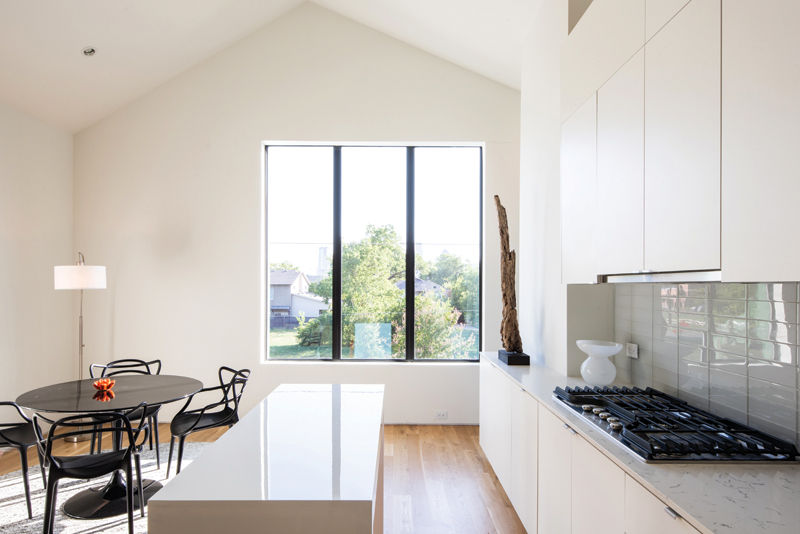 The spatial organization is straightforward. The main entry leads seamlessly into a space that can be used as an extra bedroom or a workspace. The garage and service spaces are tucked away from view. The second level can be described as a one-bedroom unit in itself, with living spaces placed toward the street and bedrooms at the rear of the site.

Ascend shows a possible path forward for developer-driven, multi-family residential design in East Dallas, one that redefines the neighborhood with greater density while adding variation and interest. Lardner Group Development was able to push design for this typology in the area while still making a decent margin on the project by being ahead of the current wave of gentrification. “Part of our development strategy is to create something unique and well designed, so we try to invest our capital in the product, not the land,” says company owner Colin Lardner. “That is a big risk, as most people look for already-developed neighborhoods where land prices are too high to build a more refined product at an affordable price. We had to trust that people would see the vision and appreciate the one-of-a-kind homes we created.”

Michael Friebele, Assoc. AIA, is an associate at CallisonRTKL.