Last week I said that when architects vote in primary elections, their influence is amplified.  That’s not some Pollyana-tinted, high-school-civics-virtue claim. It’s real; the numbers don’t lie.

In November 2016, there were more than 19 million voting age population (VAP) Texans, 78% of whom, just over 15 million, registered to vote, with 60% of those folks casting a ballot.  In March of the same year, the corresponding numbers were 74% of the VAP took the trouble to register, but only 30% actually voted.  Far worse than that initial primary participation, however, only 4%, a little over 563,000 voters, took part in the primary run-offs.

Average November participation in a presidential election year nets just under 80% of VAP Texans registering to vote, and only 58% of those registered actually casting a ballot.  Contrast that with figures from “off-cycle” candidate-election years (when we elect our Governor and most statewide officials), and a significant drop is quickly apparent—of the 76% of the VAP that registers, only 35% vote, slightly better than one out of every three (1/3).  Corresponding “non-candidate” figures are 73% VAP registration, with 11% voting.  (These are the constitutional amendment elections in odd-numbered years.)

More people vote in general elections than in the primary, and more people in presidential years than in “off-cycle” years.  The next time Texans vote is a primary election in an “off” cycle, historically better only than an odd-year vote—but aren’t all Texas elections odd. 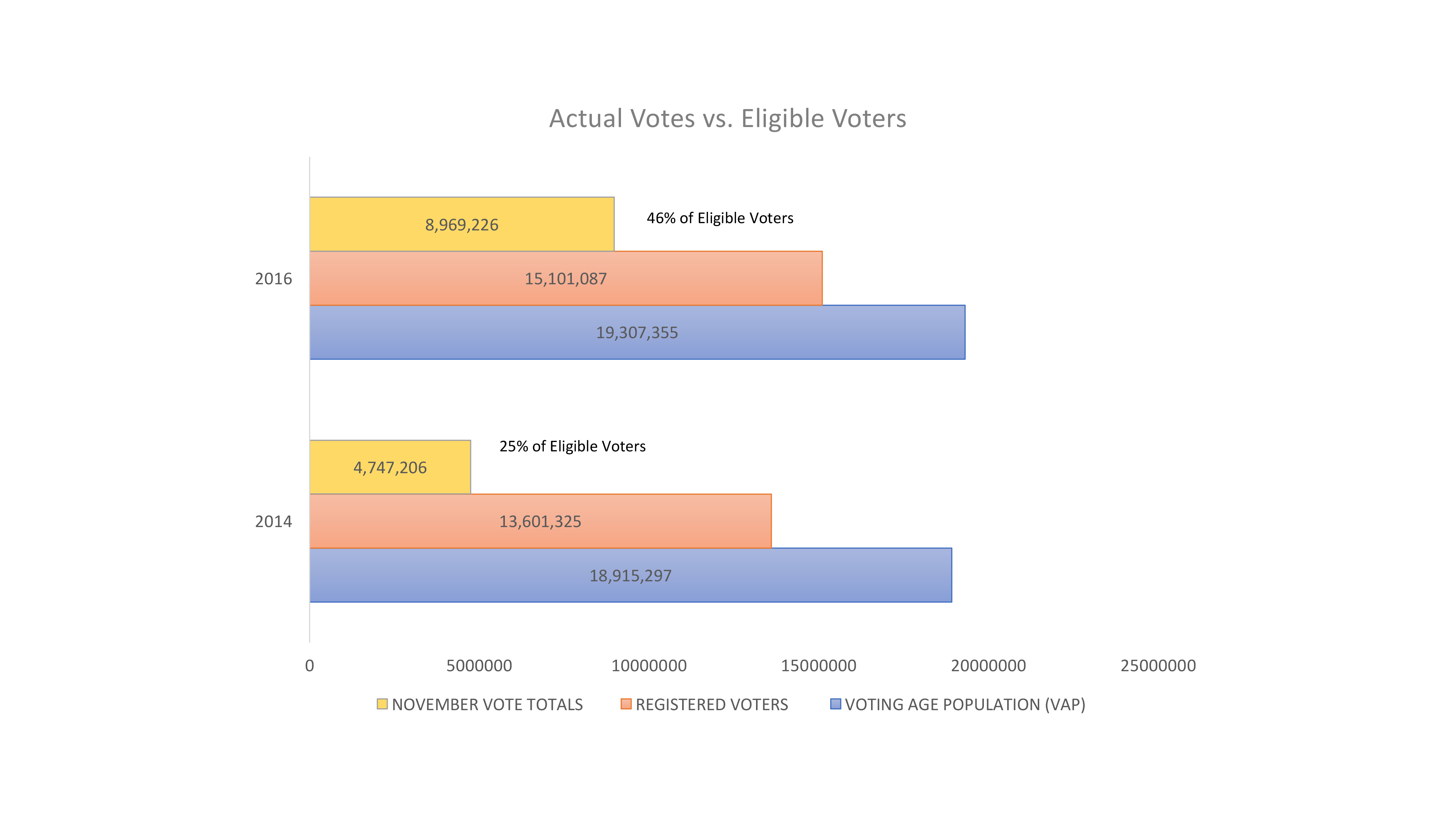 Architects will never have big numbers in Texas, or anywhere else.  The talent and dedication required to be a licensed professional are so demanding that membership is automatically self-limiting.  But the math gives the same message—if others don’t vote, and architects do, our voice is that much stronger and more significant.

The only architect to serve in Congress that I’ve personally known once told an AIA Grassroots crowd that the two best professional degrees to prepare one for real world success were architecture and law, because they included or encouraged conflict resolution.  An attorney’s training is rooted in reaching common ground via compromise, eliminating conflict, while an architect’s is achieved by a more positive or aspirational consensus approach.  The former emerged out of conflict, the latter from shared vision.

This is why architects must be active participants and public leaders at every level.  You’ve seen how individual details can impact the overall vision.  You have refined an innate skill to create—to make things better—through an arduous, mentally and physically challenging education/experience/examination process.   That’s what made you someone needed now, more than ever, to envision and inspire more inclusive, efficient, sustainable, beautiful and healthy communities at home, in Austin, or in Washington, DC.

The first step in shaping the built environment, in making it all it can and should be, is VOTE.  Do it NOW, while others are staying home in droves.  We can’t afford for our thinkers and dreamers to be discouraged, to sit on their hands and do nothing.  REGISTER NOW, and VOTE EVERY TIME THE POLLS ARE OPEN.  It’s the first step on a responsible, rewarding path.