San Antonio’s Stinson Municipal Airport is set to get a new air traffic control tower. Located in the Mission Trails area south of downtown, Stinson is the second oldest continually operating general aviation airport in the United States (the oldest is College Park Airport in Prince George’s County, Maryland). Established by the Stinson Family in 1915, it has a history that goes back to the early days of flight, and a terminal that was built by the Works Progress Administration in the 1930s. 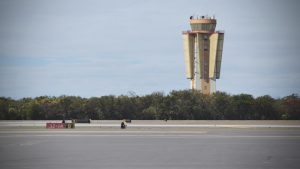 Though updated during a renovation in 2008, the terminal’s antiquated control tower could not be made to meet current Federal Aviation Administration standards. To bring the facility up to specifications, TxDOT hired AJT Engineering of Cocoa, Florida — which specializes in air traffic control towers — to design a new tower for the site. The resulting utilitarian structure was out for bid when it caught the eye of San Antonio District 3 Councilwoman Rebecca J. Viagran, who decided that such a visible project in this historic quarter of the city needed more of an inspiring face.

Viagran teamed with AIA San Antonio and TxDOT to host the Stinson Municipal Airport Traffic Control Tower Replacement Design Competition, which called on local architects to submit ideas for turning the tower into a civic icon. Sixteen proposals were submitted and deliberated by a jury that included Chuck Armstrong, FAIA, from Corgan Associates in Dallas; Daniel Hart, FAIA, principal with Parkhill, Smith & Cooper in Midland; and Sue Ann Pemberton, FAIA, principal of Mainstreet Architects in San Antonio. The winning entry, “Wings Over Stinson,” was a designed by HiWorks + Work5hop.

“The approach we took was to assume the core would stay as designed and that we’d apply a treatment to it that would harken back to the history of the site,” says Brantley Hightower, AIA, of HiWorks, who worked on the proposal with Jay Louden, AIA, and Rebekah Perez, Assoc. AIA, of Work5hop. “We were taken with early fabric-wing aircraft design that created these translucent glowing structures.”

With this inspiration, HiWorks + Work5hop designed fabric wing simulacrums with modern materials — structural steel and tensile membrane fabric — which they hung from the concrete panels of AJT’s tower core. Lights integrated within the “wings” activate at night, causing them to glow with colors tuned to the season — red, white, and blue for the Fourth of July; green for St. Patrick’s Day, etc.

The project is currently out for bid and completion is expected in the middle of 2017.