On January 11, 2016, 11 Austin city leaders broke ground on a whimsical and well-appointed signifier of Texan self-regard: the aptly named Independent. With four tiers whose precise volumes are stacked 58 stories high like so many overhanging blocks, the glass-clad residential tower resembles nothing so much as a high-end Jenga set — or, as state senator and former Austin Mayor Kirk Watson gleefully describes it, “the wildest Lego set ever.” 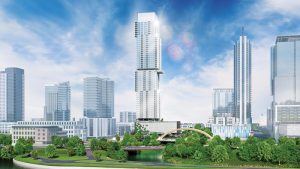 At 685 ft, the Independent will be the tallest residential tower west of the Mississippi. Rendering by Rhode Partners.

At 685 ft tall, the Independent clocks in just a hair over the height of another downtown residential tower, the 683-ft Austonian. Still, thedifference is enough to allow the lead development team to credibly declare it “the tallest residential tower west of the Mississippi,” a designation that lead architect Brett Rhode, AIA, says was important to them.

Marketing puffery aside, the building’s form arose from the strictures of the particular city block on which it will sit. Block 24, located at the northeast corner of West Third Street and West Avenue in downtown Austin, is 1.7 acres bounded at every edge by yet another design challenge. Negotiations with the city led to a mandatory setback to the north and east to preserve Shoal Creek and access to Ladybird Lake. To the south is a 72-in water main, which traverses the site and clips the southwest corner. Limitations to the northwest had to do with a long-standing legislative requirement to preserve Austin’s Capitol view corridors. “We had to deal with a lot of issues,” says Rhode, principal at Austin-based Rhode Partners. “We considered a bar-type, wider, broader structure that was maybe 35 stories tall. But in terms of the views available and distance from other structures nearby, that approach presented drawbacks.”

Rhode was born in Lampasas, raised in Copperas Cove, and trained in architecture at UT, but while living in New York in the 1980s and ’90s he began to love “going tall.” Hoping to get his clients excited about the idea of a skyscraper, he took Aspen Heights CEO and founder Greg Henry to New York to see the sights. The plan worked. “We took the trip for inspiration and, well, we got inspired,” says Henry.

On completion, the Independent will have 491,000 sellable square feet (out of a total of 950,000), with 13,500 square feet of retail on the ground floor. The 370 residential units will range from 675-sf one-bedroom units to 3,485-sf three-bedroom units, all with floor-to-ceiling glass windows overlooking the city. High-end amenities on the ninth and 34th floors will include a dog park and lounge, children’s play areas, a pool, fitness rooms, a private movie screening area, and a sky lounge and spa.

The January groundbreaking for the building represents, in many senses, a watershed for Austin’s urban ambitions. In fact, the Independent has already been many years in the making. The project is the final chapter of a complex redevelopment effort involving several neighboring properties that had been owned by the city: the Seaholm Power Plant, the Green Water Treatment Plant, and the Austin Energy site (a.k.a. Block 24). City leaders tout the project as a win, not just for future residents of the building, but for the city as a whole — and perhaps it is. City staff, led by the Economic Development Department, worked long and hard to ensure that the deal included such key community benefits as a public plaza that connects the Third Street footbridge to West Avenue, trail improvements along Shoal Creek, contributions of approximately $2.7 million to the City of Austin’s Affordable Housing Trust Fund, and $1 million for City infrastructure.

The joint development partnership behind the project includes Austin-based Constructive Ventures and Aspen Heights; and CIM Group, which has offices nationwide. Completion is expected in 2018.

Ashley Craddock is a writer and editor based in Austin.